And the LORD appeared to whom? 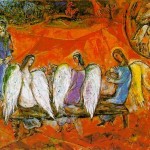 When you say the words of the living God in studying Torah, or engage in the holy work of prayer, you should intend to cleave to the blessed Creator. But you must consider the question, how can a person of flesh and blood cleave to the infinite Creator? How can the physical cleave to the purely spiritual? And after you contemplate this, the answer will come to you: God gave us the power of speech, so that we may say the words of the living God, which are themselves made up of letters, and these letters are pure spirituality. So when you say words of Torah or prayer with all of your might, offering up your soul to God, then you are able to cleave to the blessed Creator.

And through constant service of God you can merit directing the letters according to the command of your holy soul. This is what the Zohar calls being ba’al dematronita. (1) Understand this. But in the beginning of your service, you must let the word direct you in cleaving to the Creator.

And the LORD appeared to him… וירא אליו י.ה.ו.ה Genesis 18:1

Why does the verse not mention Abraham by name? (2)

The Creator pours out divine abundance upon creation. When this [infinite, spiritual] abundance enters the [finite, material] world, it manifests in the letters (3). So the divine essence of everything in this world is found in the letters of its [Hebrew] name; for example, the world of the fiery angels manifests in the word סרפים, Serafim. Likewise, the divine abundance apportioned to Abraham is found in his name, אברהם.

Sometimes, however, the divine abundance can exist in this world without this finitude and limitation.

Now someone who serves God with great self-sacrifice strips himself of the letters and cleaves directly to the abundance that has not been reduced to the form of the letters. Abraham certainly served God with great self-sacrifice — he circumcised himself in his old age! — and so stripped himself of his own letters and cleaved instead to that unlimited divine abundance. So he was not called by his name at all.

Our true essence is divine, represented in this teaching by the divine abundance taking form in the Hebrew letters of our name. But beyond this lies the source of that abundance, the One, infinite and simple, holding within It all things without being divided at all. Prayer and Torah study are two times when we can most clearly recognize our divine nature, and this meeting between Abraham and the “three men” has long been understood in both ways: prayer, because Abraham was actually talking to God (the three angels were simply the medium, made clear by the Torah’s referring to them as “the LORD”), and Torah, because the “bread and water” they shared was actually spiritual food, the only kind appropriate for angels. The Maggid of Mezeritch, the Kedushas Levi’s teacher, insisted that true prayer meant stripping ourselves of our selves and being in the Ayin, the “Divine Nothingness” that is actually far more real than we are.