Posted on October 29, 2013 by The Director of Digital Media

Every week is full of learning, davening and communicating in a variety of forms. Field trips are taken, books are read, conversations are heard, davening is done with a mechitza, without a mechitza, people are citizens of certain places, of more than one place, people have served in the army, people continue to serve in the army, people halachically observe Shabbat, people go to concerts on Shabbat – the list could go on and on. Outside of the walls of Pardes, and beyond the Mazda dealership that is beneath us, is a diverse city and an even more diverse country.

In an attempt to showcase the varying viewpoints of people living in Israel, Pardes invited a woman named Helen Gottstein to come and speak. Helen was raised in Melbourne, Australia as a secular Jew.

This is not Helen, but she was dressed very similarly to this woman.

To quote her, “Actually, Secular would be a compliment.” She spoke about her upbringing with distain claiming that all there was to Australia was “beach and beer.” She now lives in a neighborhood called Makor Baruch, an extremely religious and insular community. She explained that she got permission from her husband who, “of course, doesn’t work so that he can sit and learn all day” to come to Pardes to speak with us. In telling us about her neighborhood, she said that it was inconveniently located right across the street from the recruitment office for the IDF. Beyond not being able to understand why women would waste time studying Gemara, she couldn’t understand how someone could “get sucked into the great myth of serving in the army. Don’t they know,” she said, “that the kashrut in the army isn’t real and that they’ll be surrounded by women. What kind of woman serves in the army, anyway?” She wished that the office would close because nobody should be utilizing their time to pursue zionism, a cause that causes destruction in the house. At this point, Helen was on an angry rant. Her arms were waiving high above her head. She was shouting, while at the beginning of her talk, many of us had to move closer so that we could hear her soft, faint voice. Two people had asked Pardes faculty if they could be excused from the lecture because they felt too offended to remain in the room. Right as Helen was explaining that she didn’t believe in the existence and evolution of dinosaurs, she removed her hat, showing her hair and, with a deep breath, she proclaimed, “I’m actually an actress.”

Pardes student, Melissa, who’s rocking a look very similar to what Helen looked like at this point.

Helen put her black hat into her bag, unbuttoned her sweater a little bit, rolled up her sleeves and tied a colorful scarf around her head. She opened her mouth, and the strongest Texas accent I’ve ever heard came out. After introducing herself, she began to talk about her dislike for the A-rabs. She boasted about the gun that she always carries with her and when she witnessed a 7-year-old A-rab throwing a rock at a Jewish woman, she wondered why she didn’t just pull it out and shoot him in the head. “If that’s what he’s doing at 7, imagine him at 17.” When asked about peace, she said, “the only peace the A-rabs want, is piece by piece by piece.” She ranted about how Hamas is equatable to Iran, how every Iranian was the source of terrorism and they hate Jews and anyone else who disagrees with them. With that, she took off her head scarf, unzipped her skirt and began to rummage through her bag for more props.

She wrapped her head scarf around her neck, spiked up her short hair, quickly applied lipstick and, while looking at herself in a pocket mirror, she began to embody an Israeli kibbutznik. She had the typical attitude of a Sabra and constantly through in Hebrew phrases saying that “English is a language for people who hate people. Look at that, it’s a light. Now, explain to me how to spell it in English.” She looked around, realized that we were sitting in a room full of Torah books and began to judge us for praying. Her vantage point was that if someone (G-d) had been looking out for the Jews and responding to their prayers, history would look different. She spoke about the future of Israel and the future of her sons. “In 40 years, if we don’t end the occupation today, your grandchildren will be in the army.” And that wasn’t the future that she wanted for her family. “We are going to ask the Palestinians to give up 78% of their land and have 2 states and that is how it has to work.”

She told us that we should get up and switch seats because her next outfit would take a little longer to put on. As we stretched and moved around the room, Helen covered her hair with a hijab, put on a long coat and buttoned it up to her neckline. After she tucked in the last wispy bits of hair, she greeted us with a warm Salaam. She told us about her morning, about how she had to drive through a check point to go to the school that she worked in as principal. “It’s easy to get into the Arab area because they don’t care if I have a bomb. The other way, it’s more difficult.” She told us about a time when an 18 year old soldier harassed her for an hour, questioning her about every individual that she came into contact with over the course of the day. She felt embarrassed and assaulted. She felt disenfranchised. Most of all, she feels as though she’s a part of a system with institutionalized racism. “The security fence doesn’t grant me security,” she told us. Although she was born in in Jerusalem, and had lived there for her entire life, she wasn’t granted citizenship and, as a result, she is unable to vote in National Elections. “I want to be a Palestinian citizen, but until that can happen, all I want is to be Israeli.” She expressed a way that she thought it would be possible, through equal rights and equality overall. She closed by saying, “Peace has a brother, his name is justice.”

Helen took off her hijab and over coat, she rustled her hair, sighed a deep sigh of relief and poured herself a glass of water. She told us that all of the characters that she portrayed were statements that she had heard from real women and that these personalities, and many others, were in Israeli society. Every time we tell the story of our lives, we leave out certain parts for a number of reasons. The reason Helen does the work that she does is to “bring forward inconvenient truths that we leave out when we tell our narratives.” By hearing four different sides of the same story, we were able to see some of those inconvenient truths. The real Helen closed by saying that nothing is static, especially a complex situation such as the state of Israel, but that dialogue is an achievement of tolerance.

The next day, 15 Pardes students, including myself, and 2 faculty members went for a more hands on experience. We went to Telzstone, a Haredi neighborhood, to Kibbutz Ma’aleh Hamisha, a secular kibbutz, and to En Rafa, an Arab Israeli town and spoke with women who lived in each of the places. Each of the three women, while living completely different lifestyles, all spoke of their love and devotion to their family, the great extent to which they loved their lives, and the deep connection that they had to the land of Israel. It was a challenging day, but I also returned home feeling hopeful.

Israel is a complex place, the issues are not simple, they aren’t small, but people make it work. Israelis have hope for peace and that makes me feel secure. 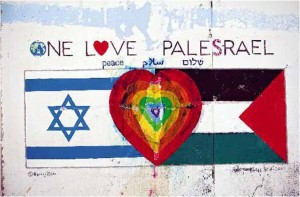