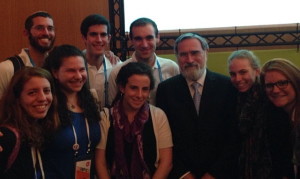 This past week, I had the privilege of being a member of the Masa delegation to the Jewish Federations of North America General Assembly. The JFNA is the largest Jewish charity, and I believe the largest charity of its kind in the world, and its primary purpose is to raise money and distribute it in North America and around the world. Throughout the conference, I found myself wishing that the JFNA would own up more to this mission — it is a noble one, and yet I felt that it was mostly left unsaid.

The Federations want young people to be involved in their activities, and their primary activity is raising money. We should all want to participate in this, as most of us have benefited from Federation funding at some time in our lives. Whether through Taglit, or Masa, or Hillel, the Federations have a hand in much of the great stuff that happens in worldwide Jewish life today. I think the number one thing that young adults can do to help the Federations is to recognize and talk about this role.

That being said, JFNA has a lot of work to do in figuring out how to relate to young adults. I’ll tell a story to illustrate that point. On Monday morning, in the plenary session that opened the day, Michael Siegal, the Chair of the Board of Trustees of the JFNA, was speaking about the role of Federations in history and today. The gist of what he said was this: we (the Federations) were there for Ethiopian Jewry, and we were there for Soviet Jewry, and now we need to be there to combat the trends of the Pew report in North America.

I took some issue with this. I can’t connect with the idea of “saving people from themselves” as something that should inspire me, and I question, who am I to judge if my friends in America decide that Judaism is not the most important thing in their life? Rather, I see it as my task to make Jewish communities as vibrant as possible, to show them what I think is so great about being involved in the first place.

After that session, I attended a panel discussion about making Jewish communities in North America more accessible to people with disabilities. Jay Ruderman, from the Ruderman Family Foundation, spoke about how he sees this issue as a part of the discussion about Jewish continuity. Young people across the board want to be involved with Jewish communities that are open and inclusive, whether to people with disabilities, or the LGBT community, or women. I spoke with him after and told him that I thought he was 100% correct about young adults’ priorities in choosing where to affiliate, and I asked him, why didn’t Michael Siegal talk about this in his speech? It would have been so much more compelling to say: we were there for Ethiopian Jewry, and we were there for Soviet Jewry, and now we’ll be there for the Jews around the world who continue to be marginalized within their communities. I could get my friends and myself excited about raising money for an organization that expressed this purpose.

That doesn’t answer a more fundamental question, though, which is why care about being Jewish at all? Monday afternoon at the conference, Chief Rabbi Lord Jonathan Sacks offered a great answer to this question. He started by talking about how he doesn’t see the Pew report as an epitaph for American Jews, but rather as birthing pains for a potential revolution. He noted that it was possible to look at the data, which shows a good amount of assimilation, as an amalgamation of three success stories of American Jews. The first category of people is those who wanted to assimilate into the larger culture. In the early 1900’s this was only a fiction for Jews, and now it’s a reality. The second success is that of Mordecai Kaplan’s vision, which saw Judaism as a national identity that could survive and thrive in close contact with other identities. And sure enough, the Pew report shows that 94% of American Jews are proud to be Jewish, even if they’re doing nothing to actively express this identity. The final success is that of American Orthodoxy, which has a huge retention rate. Nobody expected that Orthodoxy, transplanted from Europe, could survive in America, and yet it has thrived.

The people at this conference worried about the Pew report largely represented the huge mass of American Jews who don’t fall in any of those three categories. Sacks’ advice for them was this: in order for Jewish involvement to be a compelling option for young people, Judaism needs to offer something that nothing else in America does. Sacks has his own idea of what this is, but from my perspective, I think it is rooted in the incredible textual history of our people and the ideas contained therein. I feel so blessed to be studying at the Pardes Institute of Jewish Studies this year, where I am learning to engage with this tradition and learning how to make it available to others. I plan for that mission to always be a part of my life.

When a moderator asked a panel of young people “what animal is the JFNA like?”  at the beginning of the conference, I whispered to my seat-mate: “dinosaur.” But as I reflect back on my experience, I’ve changed my mind. The dinosaurs could not evolve to meet the changing needs of their environment, but the JFNA is doing just that. It is not like a single animal. Rather, what we’re witnessing now is a speciation event, where a Jewish organization is recognizing that the environment has changed enough that previous success strategies are no longer sustainable. Evolution is slow, and the adaptations may make the creature unrecognizable from what came before it. But the Jewish world will always need a major charitable organization like the JFNA, and after attending the General Assembly, I can say that I think the JFNA is ready to do what it takes to be around for the next century.