The Country where Christmas Wasn’t

On Tuesday night, I went to Bethlehem. 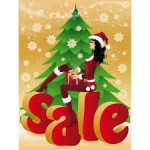 Growing up in America, all I saw of Christmas were signs reading “Buy One get One FREE” and “Sale: 70% mark down! 5-7am only!!” All I saw was consumerism and a huge traffic jam outside of the church. But this year I’m in the Middle East! I thought. I’ll be able to see the real thing! I spend most of my time among religious Jews—but now I have a chance to see some pious Christians! The actual amount of piety I witnessed left something to be desired, but it turned out there was more to the evening that just the celebration of Christmas.

To tell you the truth, I didn’t quite know what I was getting into when I decided to visit Bethlehem on Christmas Eve. Last Thursday, an adventurous friend (whom I greatly admire) casually threw out the suggestion: “Want to go to Bethlehem on Christmas Eve? It’ll be so much fun!” Trying to ignite the courageousness that I know is inside of me, I said yes without much deliberation. I’m in Israel, right? I should be doing things exactly like this! This seemed like a once-in-a-long time chance. In most of Israel, Christmas is nowhere in sight, and now I had the chance to see the ‘somewhere’ where Christmas was.

On Tuesday evening, five of us gathered: three girlfriends, my boyfriend and me. I had been cautioned ahead of time to be “as Christian as possible” so, for the first time in about 10 months, I put on jeans and wore them out in public. I also tried to call my boyfriend by his English name (Jesse) rather the Hebrew version he usually goes by (Yishai).

We all met at a bus stop on Hevron Road, equipped with cameras, passports, hats, scarves and bus fare. The Arab buses don’t stop at the Egged stops unless someone explicitly asks, so when we saw a bus coming, we ran to flag it down. It was a white coach bus, complete with cushioned seats and working heat. Is this how the Israelis try to pacify the Arabs? I wondered. Coach buses for the 30 minute rides to and from their homes?

After about 10 minutes, we began seeing Christmas lights through the windows of the bus. After another ten, we were riding through the sloping streets of Beit Jala, seeing buildings and signs telling us we were in Palestine. Soon the bus bumped along into Bethlehem (Beit Lechem in Hebrew), and as soon as we got off the bus we were grandly heckled by cab drivers offering to take us to “The Church.”

(But the cab drivers wouldn’t leave us alone until we said “Merry Christmas,” which, I have to admit, felt sacrilegious when it crossed my lips. Such is the price of being an undercover Jew for the night.)

After about 15 minutes of walking through streets full of crowds, lights and litter, we entered the “Old City” portion of Bethlehem. There were no more cars, and infinitely more seasonal decorations. We stopped every few minutes to snap some pictures, but mostly I just enjoyed hearing the Arab pop music, smelling the roasted nuts, and seeing the big, pink, jelly-like blocks of powdered Turkish Delight. It was American consumerism meets Jerusalem stone, Arab culture, and international tourism.

There were people from every corner of the world. Africans, Frenchmen, Swedes, Spaniards, Koreans, Chinese, North Americans, South Americans. In my quest to disguise myself as a Christian tourist, I was succeeding mightily—especially because I speak perfect English. Sheltered American, anyone? Brought to you all the way from New England. What was difficult, however, was to resist speaking Hebrew. When I hear the languages of the Middle East, my instinct is to speak Hebrew (especially when in Israel.) I had to remind myself, however, that I was hearing Arabic, not Hebrew, and the speakers would not be too keen on hearing the mark of a Jew in their midst.

“Are Jews even allowed there?” my older brother asked as I told him about my adventure (ex post facto, of course). 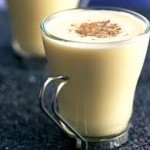 We spent most of our time in Manger Square, the area just outside the Church of the Nativity. The square was filled with lights, balloons, milling people, vendors selling corn and sahlab, TV trucks, disaster control vans, and Palestinian Authority soldiers. There was a towering electric Christmas tree, a life-sized crèche, and a large stage where groups from South Korea and Africa sang Christmas songs (separately) from their respective cultures. The crowd was thick; the smoke was thicker. It must be decreed somewhere that if you are an Arab man without a cigarette on Christmas Eve, curses will fall upon your household for the entire next year, I thought, as I breathed into my scarf and rubbed my itchy eyes.

As we pushed through the crowd to see the Africans, the nativity scene, or to get a good photo, I felt the Arab men’s eyes always upon us females. Their hair gel shone; their clothes were tight; their smiles were sly and entirely too long. I held Yishai’s hand tightly, but when your boyfriend is a photographer, you’re going to be walking alone some of the time.

My friends indulged in the hot corn on the cob and the creamy sahlab, but when they proposed sitting down at a café for a little while, something inside me reached some sort of limit. I’m wearing pants and I’m in Bethlehem, I thought. One thing I will not do is sit at a non-kosher restaurant. What if the staff makes me order something? Or what if I’m tempted to try what my friends are eating? I don’t exactly know why I drew the line there, but I did know that I could eat nothing and still pass, unsuspected, as a Christian. I was going to hold on—tightly—to this one piece of Jewish identity. There was absolutely no reason to break kashrut here, so I did not. What made me scared, however, was the strength of the appetizing smells, the rare delicacies, and a rumbling stomach. When surrounded by another tantalizing (and delicious) culture, it easy to let it envelope you.

Despite our difference of opinion, my friends are extremely loyal, and they respected my discomfort with the whole café situation, so we sat on some steps in the square and watched the people go by. Soon, however, it was clear that people were watching us, too. A group of teenage boys came over with their cameras, and jostled to sit next to us for a picture.

“Where you from? Where you from?” they asked, wanting evidence that they had met a pretty American. We let them take pictures with us, but Yishai kept saying over and over,

“Hey! She’s my girlfriend! Watch it!” Clearly, they didn’t understand what that meant, because one of the boys tried to put his arm around my shoulder and another one asked Yishai, “Wife? Wife?”

We left soon after.

On the way out, we bumped into another group of Pardes students who had also come to observe the festivities. It wasn’t until talking to them for a few minutes that I realized: some of these people have never seen me in pants before… But they knew how to get out, so we followed their lead.

Getting out of Bethlehem was nothing like getting in. We weren’t sure how to get back to the bus stop (or if buses even stopped there in the other direction), so we aimed to get to the check-point and take a bus from there. We walked. And we walked. When we got to the vehicle check-point, we had to stop and ask a cop for directions to the pedestrian check-point. He pointed us down a dark alley.

And follow the wall we did. We walked past a deserted gas station and then there it was—graffiti and all. A lot of it was in English; some was inspiring; some was offensive; some was downright art. And it was all scrawled onto the towering, gray security wall that protects ‘us’ from ‘them.’ 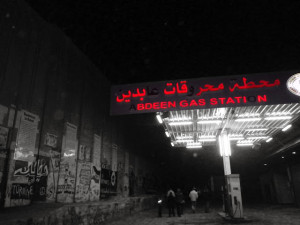 The gas station and the wall

We finally made it to the check-point. We walked through a hallway made of metal bars and then zig-zagged our way through the metal detectors, gray-paneled walls, and bleak signs telling us we were in a military zone. When we had all passed through security, we showed our passports to two giggly Israeli soldiers who yelled “California!” as we were leaving.

“Some people have to go through that every day just to get to work,” Yishai told me. “Now you know what it’s like.”

But I don’t, really. I know what it is like to have an American passport and get checked by Israeli soldiers who probably figured out we were Jewish and let us through with no questions.

But I don’t know what it is like to wait at the metal detector, knowing you are entering a country where you are not wanted, and perhaps even a country that you don’t want to enter.

I don’t know what it is like to live surrounded by fellow Arabs, eating, drinking and loving like everyone else, and then realizing that I live in a sort of prison; I can only get out if ‘they’ let me.

I don’t know what it is like to look at the wall every day, to paint political anger on the wall, to see the wall on the way home from work and know that it means I am almost home. 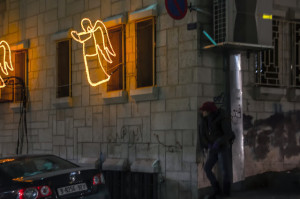 We boarded the Arab bus, and I leaned against Yishai’s shoulder for the short ride home. I closed my eyes and the tears started. They were few, but they were there. I didn’t want to listen to my friends talking and laughing about how “unimpressed” they were by Bethlehem on Christmas Eve. Sure, I was also disappointed that there were lights, music, and vendors instead of candles and graceful nuns, but at this point, I didn’t even care that it was Christmas anymore. I had just been to Bethlehem. I had seen ‘them,’ and I was slowly re-becoming ‘us.’

Climbing into bed a little while later, the tears came more readily. Yishai tucked me in and didn’t want to leave me, but I told him to go; I needed to sleep. So he left. And I slept. Back on this side of the wall. Back in the country where Christmas wasn’t.