[Student Profile] Emet Ozar and Jessica Baverman would like to get Married. Once. 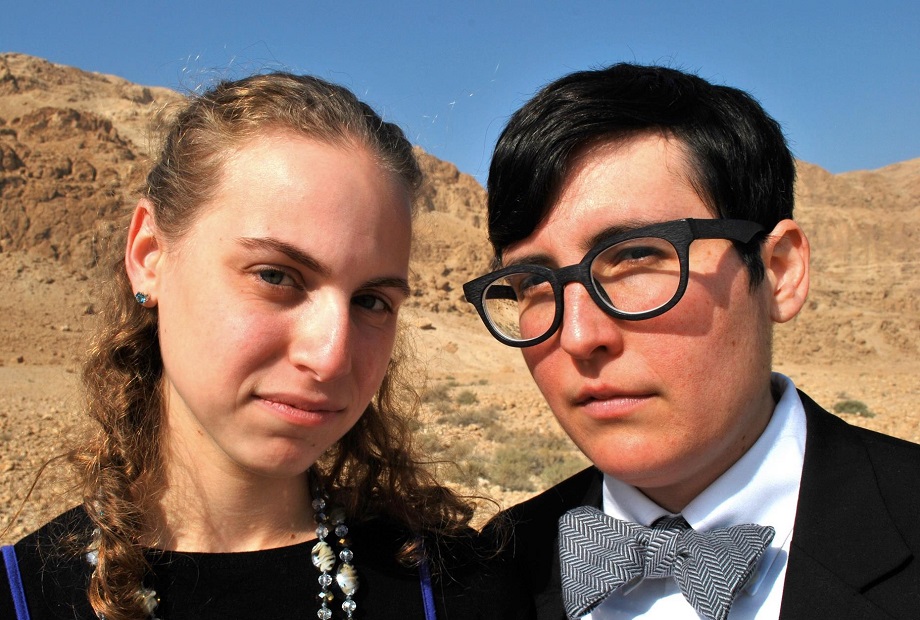 The time was, that when you came into Pardes, the first thing you would see in the morning was Emet Ozar (32) and Jessica Baverman, MSW (27), being cute. Not snarky, but god’s own living Bambi. Unfortunately for us, but blessedly for them, the love birds have flown back to the United States to prepare for their impending nuptials.

Before they left, I got the chance to sit down with them and ask them how Pardes got to be the lucky place where they learned Torah and shared love with the rest of us.

Emet came to Israel from Thousand Oaks, CA, and landed in Ra’anana. When I first met her, actually, she was coming to the Jerusalem Open House for their English Speakers’ Group. “It was quite a haul to get to Jerusalem, bit I was looking for a place where I would fit in, religiously and with the queer community. I was trying to find some common ground for both to exist. It was too hard to go to Gan Meir without Hebrew — I asked for English and they told me they didn’t have things for tourists, but I wasn’t a tourist!”

Jessica came to Israel to live in Gedera and volunteer with the Yahel program, working with the Ethiopian Israeli community there. She’d been living with a Jewish community both before Yahel and then at Yahel that exposed her to a type of Jewish living she wanted to deepen.

WE REALLY WANTED TO STUDY SEPARATE OF EACH OTHER, AND WE BOTH CONSIDERED PARDES, AND THEN IT WAS REALLY MORE HAPPENSTANCE THAT WE ENDED UP HERE.

Emet and Jessica think you should probably read about how they met on their blog. They met at Sarah Weil’s monthly Women’s Gathering, at a cafe. It was the end of May, and Jessica opened with the hard question: what are your goals in five years?

Let’s just let them tell it

Jessica: I didn’t want to get in a relationship that was just fooling around; and I was wondering why Emet made Aliyah; I asked her what the goals were, and the only one I remember were getting married.

Emet: Then from there, we did a lot of talking, and we were very intentional in the way we were dating.

J: I didn’t want to get into something that was terrible or where we didn’t have the same goals. So we made sure we got on the same page life-wise and goal-wise.

E: I knew that I had heard a decent amount about how Orthodox people approached getting married, and I thought, ‘Wow, this a really great idea to zero in on life goals and intellectual compatibilities before physical. She had been reading Chana Levitan’s book “I only want to get married once”. It’s very: let’s talk about things and lets not get physically emotionally involved without having done this hard work, knowing if we could grow together.

J: In a month and a half we were sure that we could. We talked about getting engaged in August when I would get back to Israel. From there, because we wanted to have a Jewish household, and needed to learn, we both independently found our ways to Pardes.

I TOLD YOU THAT NEVE (YERUSHALAYIM) WASN’T GOING TO BE THE PLACE.

Emet was considering Pardes or Neve, and Jessica was picking between Pardes and the Conservative Yeshiva. As is often the case, they each had come to visit classes, and were thus inspired to pick Pardes.

For Jessica the tipping point was sitting in on Women and Mitzvot with Rahel Berkovitz. For Emet, it was the pants. It was the ability to get to be an honest reflection of their best selves, they stressed to me, as I confirmed the above points.

SO WHAT ABOUT QUEER IDENTITY AND HALACHIC NORMS?

Emet: We’re comfortable here and accepted here and embraced amongst the students; and I think that the teachers are embracing of students in general; I still have no delusions that they actually think that I’m halachically ok. They might think you’re a good person, you’re a Jew, but I don’t think that any of them think I’m getting halachically married.

J: At the same time there are teachers who recognize our desire to live in a halachic system and make it work for us on our terms and they support us and think its radical and amazing, even if it’s not their choice. Theres a space for us to be halachically as we want to be and thats ok.

E: There are certainly a lot of teachers who aren’t mainstream.

J: The other part of it is that I’ve been in Orthodox communities and I know that if I had come out there was no way I would be accepted but shunned, and I accept that. I look at different strands of Orthodoxy and I know where I could fit in, if I even want to fit in. If we’re talking about Pardes specifically, I don’t think I’ve felt animosity or uncertainty of our place in the community.

They’ve both done Discovery and Jewel, which are a different tack on the mission of Jewish education, and their take away about Pardes in comparison: it’s the only place where one can get a traditional Jewish education in some way from a Modern Orthodox perspective. Where one can decide how to take on what’s learned. Pardes, they say, makes the effort to be open.

WHAT DO YOU ADVISE FOR RELATIONSHIPS?

Jessica: You have to be in the same place in life; your relationship has to be with both of you!

Emet: You could be with the most amazing person on the planet, if they’re not ready it’s not gonna happen. We talked about so many BIG issues at the beginning, and of course we have a ton of stuff that we talk about and talk out about but the big stuff we knew we aligned, and we work. And if it hadn’t it wouldn’t have worked. And that might have been awkward.

Part of the joy of learning with Emet and Jessica at Pardes together, has been that their simcha really felt like it was our simcha! At many levels the story of their official engagement, and their celebrations here in Israel, has been the story of the Pardes community clinging fast to them. We wish them the best of luck as they continue on in their journey together, that they build a true house of belief amongst Israel.

WE WERE SO EXCITED THAT EVERYONE WAS DOING IT, AND WE LOVED IT.