I recently searched for & found these online instructions for making flowers out of old bread. This would be a fun art project – it’s not so complicated:

Truth is, I had never considered that bread could be used to make permanent pieces of art – until I visited the Sachsenhausen concentration camp near Berlin on the 2014 ‘Germany Close Up’ – Pardes trip. There – in the museum – a particular figurine caught my attention, amongst all of the Holocaust memorabilia – I was taken with its beauty and confused by its accompanying description panel. (by the way, a cursory Google search led me to find a photograph of a chess set of bread, also made during the holocaust) 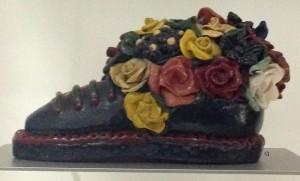 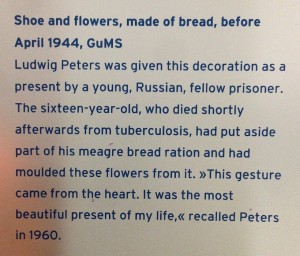 a poem dedicated to a murdered 16-year-old boy

I had technical
questions at
first

how can this be possible?
how can bread last for 70 years?
maybe it’s the finish that preserves it?
maybe it was more sawdust
than
bread?
what were concentration camp prisoners
given to eat during the Holocaust?
how much of his meager ration did this
16-year-old
boy
put aside for this art project?

In a Holocaust concentration camp
where he was meant to die
where did he hide
this little shoe
what if a Nazi had found it
and stepped on it
with his shoe
because?

I’ve never made such a
beautiful
little
figurine
didn’t know it possible
never been limited to only sawdust
bread for art supplies
never been stricken with
tuberculosis,
murdered