Although they both hail from Los Angeles, Kara and David only met in college at UC Santa Barbara. 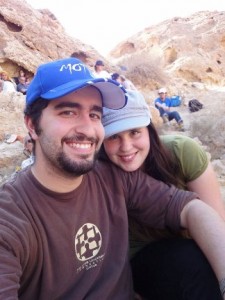 As a child, Kara attended Christian Science church every week with her mother, but she became skeptical about religion as a teenager, and came to identify herself as culturally Jewish. David was raised in the Conservative Jewish movement, attending Hebrew school in the afternoons and Camp Ramah during the summers.

Before they met one another on their first date, their friends “forgot” to tell Kara that David was an aspiring rabbi. The following week, Kara found herself at Hillel for the first time, and then decided to study Hebrew so that she could fully participate in the Jewish prayer service. Kara soon became one of Hillel’s most active students on campus.

In college, David worked for the Conservative Movement through KOACH College Outreach, but he gradually found himself being drawn towards non-denominational Judaism, and eventually to Modern Orthodoxy. After college, David contacted Yeshivat Chovevei Torah to inquire about their rabbinic program, and they encouraged him to spend a year at Pardes before beginning his studies.

The young couple are now very active members of the Pardes community, and of course, both have their favorite courses! Kara greatly enjoys the Pardes “Foundations of Judaism” class, as Rabbi David Levin-Kruss designed the curriculum around the students’ own questions; while Rabbi Elisha Ancselovits’ “Thinking Like a Halakhic Sage” class continues to shape the way David has come to understand halakha, Judaism, and the universe… David says that this class impacts all of his other studies.

At Pardes “we study Jewish texts for themselves,” says David with a smile, “it’s not a denominational approach to Jewish study – we’re learning from all of our classmates’ diverse perspectives!”