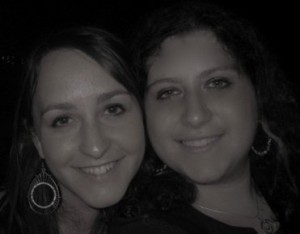 Natalie (above, right) and her sister Sharyn (above, left) from Melbourne, Australia arrived at Pardes in September, knowing they would only be able to join us for one semester. Natalie (Nat) informed These&Those that the Australian summer holiday is in December and January, and the academic year runs from February through November. This explains her plans to return home next week to continue her professional studies. Nat’s reason for leaving Pardes checks out okay, but we’re still going to miss her!

Both sides of Nat’s family once lived in Poland. Her mother’s family has lived in Australia since the 1930’s, and her father’s parents arrived in Australia via Israel in the 1950’s, having met in a Displaced Persons Campafter the Holocaust. Nat feels deeply connected to her grandparents’ stories of survival, and for this young woman one of the most rewarding facets of a life full of Jewish ritual is the honor that she holds for her family’s traditions.

Nat attended Bialik College, a Zionist Jewish day school, and she was very proud to tell These&Those that upwards of 70% of Australian Jewish children in Melbourne attend Jewish day schools! In 2005 Natalie visited Israel through Habonim Dror, and returned for a Zionist youth seminar in 2007. Driven by activism, Nat became the head of education of the Australiasian Union of Jewish Students in 2009.

After receiving a degree in liberal arts and another in science, Nat felt that the time had come to ground herself in Jewish text study before pursuing her education diploma in Australia. She was looking for an intense, co-ed learning environment in Israel with a strong Tanakh curriculum… and Pardes was the perfect fit!

Rabbi Meir Schweiger’s Chumash class greatly inspired Natalie. His class was methodologically compelling, and his enthusiasm filled the classroom. “I hope to some day inspire my students to find such meaning in reading Chumash!” she exclaims. Another class that Nat recommended is Rabbi Levi Cooper’s Rambam class. “He pushed us to achieve more than we ever thought we could… and he taught us a lot more than just Rambam!”

Beyond lessons learned in Pardes classrooms, Nat was also impacted by her exposure to the student body. The vast majority of synagogues in Australia are Orthodox, and Natalie felt challenged by the wide range of religious views and affiliations among the students of the Pardes community.

“I continue to feel strongly that Jewish continuity was sustained by Orthodox traditions throughout history and also today,” she explains, “but I’ve developed a much broader appreciation of the global Jewish community through Pardes, and I think this experience will empower me to relate to my future students with greater tolerance and understanding.”