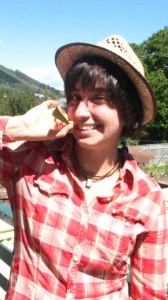 After graduating from Northwestern University in 2005 with a major in theater, Avi Strausberg (2010-2011) started a non-profit theater company called the ‘Hometown Theater Project’, and continued acting and directing in Chicago for nearly three years before she found herself becoming antsy.

“I wanted to be some place beautiful, and I became interested in organic eating & farming — so I moved to New Zealand to farm and manage an organic grocery store!

But after about a year in New Zealand, I realized that I really missed having a Jewish community… and then I heard about ‘Adamah’.”

In the Fall of 2008 Avi joined Adamah, and found exactly what she had been looking for. She lived in, farmed along with, and celebrated Shabbat with her new Jewish community, and even started exploring the texts of the siddur and Tanakh on her own.

After completing her three month Adamah program, Avi felt that she wanted to continue Jewish text study, and she spent the Summer of 2009 learning at Elat Chayyim before moving to NYC to begin a prestigious, year-long fellowship at Yeshivat Hadar. As one of 18 Fellows, Avi learned a great deal at Hadar. She developed her Talmud study and shaliach tzibbur skills, and she became inspired to study towards the rabbinate.

At Yeshivat Hadar Avi also met her girlfriend Chana Kupetz, another Fellow, who had come from Israel to study Torah for the year after completing her Israeli Army service. After being accepted into Hebrew College for rabbinical studies, Avi deferred to live and study Torah in Israel for a year, and she selected the Pardes Year Program for its diverse student body.

At Pardes, Avi can be found leading the egalitarian minyan as its gabbai, and grabbing volumes of Talmud off the shelves of the beit midrash with her chevruta. In Talmud class, Rabbi Zvi Hirschfield pushes Avi to become an independent Gemara student, and she finds herself greatly appreciating the skills that she learned from Leah Rosenthal at dissecting and clarifying Amoritic texts… some day, she’d like to integrate her new text skills with her passion for theater and the arts.

“I’d like to synthesize text with the creative energy of the arts to create deeper connections with the material, and make it more relevant and more personally meaningful. This was my vision for the Haiku Torah Project, which I began on Simchat Torah.”

UPDATE: Avi received the Wexner Fellowship for next year!