My Bubbie died Tuesday morning. The funeral will be Friday. As I am in Israel, I will not be able mourn with my family or attend. But this is life, this is what happens.

It was not a shock, she had been sick for about a month and seemingly getting worse every day.  It felt worse not being able to do anything while she was sick. I wrote her a letter Sunday and mailed it Monday. You could say I sent it too late, but I like to think she has now read it early.

Thank God, the rest of my family is and was there for her. My Bubbie lived in Latrobe right down the street from my aunt, uncle, and cousins who, in sickness as in health and now in death have always been so good to her. My parents were also there when she died, as was her identical twin Aunt Shirley. Knowing this also brings enormous comfort. Right now I want to hug my Mom so bad I can’t stand it, but such is life. 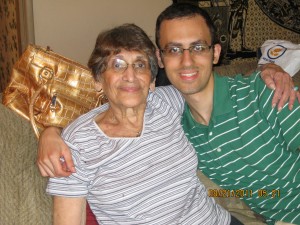 The attached pictures are from the last time I saw Bubbie, my last Sunday in America before leaving for Pardes. She was healthy at the time and looked good, but I knew in the back of my mind this could be the last time I would see her. I didn’t think it was probable, but I knew it was possible. If it looks like I’m falling over her in these pictures, it’s because I am–when I sat down next to her on the couch, she pulled me right over to her side, resulting in our final position seen here.

We saw her maybe four times a year. I love her, but we never had a close relationship. Mom and I would joke about how every time my sister or I called her, she would ask how we were and how school was then ask if our Mom was there so she could talk with her. If we talked more than 2 minutes, it was a long conversation. It wasn’t anything personal, she just didn’t have anything else to say. I am the same way. I think I got my awkwardness on the phone with anyone but those I’m absolutely closest to from her. One thing she always did tell me was how proud of me she was. One thing she always asked me was whether was eating enough because I’m too skinny. 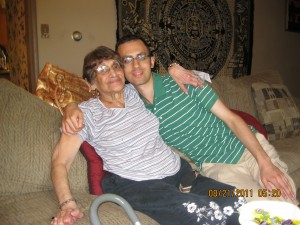 She was the bastion of Jewish life in Latrobe. She wasn’t religious, but she had my sister and I call her “Bubbie” to prevent confusion with our other Grandma (z’l). She never, ever missed the Bar- or Bat-Mitzvah of any of her 3 sisters’ grandchildren.  She would also interrupt any conversation around the dinner table with, “I hear s/he’s Jewish” or “Do you think s/he’s Jewish?” This was invariably met by a groan, eye-roll, and “Who cares?” from the others around the table. I used to laugh at it, too, but thinking about it now, I see it was about something deeper. Bubbie was the daughter of two Eastern European immigrants and grew up in Squirrel Hill. She came to Latrobe after marrying Papa (z’l) and lived there the overwhelming majority of her life. At the time there was a small Jewish community there, but that number has since dwindled to little more than her and my aunt’s family. Her obsession with pointing-out other people’s Judaism, I think, was a way of her affirming her own Jewishness in a place increasingly devoid of it. She seemed ambivalent at best about my coming here, but I see it as the expression of another trait I inherited from her.

You know who’s Jewish, Bubbie? I am. And I thank you for it more than you could ever know. Except now maybe you do.

I first heard the news from my cousins’ status updates on Facebook Tuesday shortly after I came home from class. As I said, I wasn’t shocked, but I was very sad. Almost as soon as I understood that she had actually died and not just become sicker, my cousin sent me a Skype invitation. She, my parents, and my aunt were on the other end and we talked for awhile. Around the same time I started getting consolations over Facebook (which are still coming), and later in the night, my sister Skyped me.  She was in Ireland in 2010 when Grandma died and so likewise couldn’t attend her funeral. It would have been great talking to her anyway, but being able to commiserate with her helped so much. So while I didn’t leave my room all night, thank God, I never felt alone. I did feel badly in need of a hug, though, which is why it meant so much to me to be able to receive plenty of those, along with eye-to-eye heartfelt consolations, offers of help, and reassurances from those who likewise know what it feels like not to be able to be there when a loved one passes away, today at Pardes from those who got the news. If you’re reading this, thanks again.

Maybe the first memory of Bubbie that came to mind once it became clear she really had passed on was from a few years ago at my aunt’s house. I don’t remember the occasion, but we were all sitting around the dining room table, and Bubbie and Aunt Shirley were talking about something, I can’t remember what, when suddenly, they both began convulsing, falling on top of each other, crying with laughter. The sight of them laughing like that set the rest of us off, and they kept going even after the rest of us couldn’t laugh anymore.  It was one of the most beautiful sights I have ever seen.

Quotes of the Week:

“I love you all.”
-Bubbie’s last words