Posted on December 29, 2011 by The Director of Digital Media 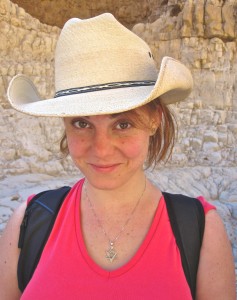 One of this year’s Pardes Fellows is studying at Pardes for her first time this year – last year she was studying at the Conservative Yeshiva. Réka Eszter Bodó is one of Pardes’ international students; she’s from Hungary, and These&Those (Th&Th) thought it would be interesting to interview her to learn a bit about her life in Eastern Europe.

Th&Th: Can you give us a quick overview of the history of Jewish life in Hungary before 1989 (the end of Communism)?

Réka: So let’s jump back in time, for a short overview from the Jewish point of view. The period of the Austro-Hungarian Empire was a Golden Age – not only for Hungarians, but also in a way for Jews – emancipation, assimilation (Jewish nobles!), acculturation, the Reform movement, Orthodoxy, Hungarian Charedim…

Then came the Holocaust and Communism. Holocaust survivors had two options after the tragedy of the complete destruction of countryside Hungarian Jewry: you could keep on being Jewish (whatever that means, you go to synagogue or you are Zionist) and risk your career and your children’s education, or you could accept the communists’ suggestion (among whom were a lot of your Jewish friends who reasoned that “my enemy’s (Nazi’s) enemy (the Soviets) are my friends”) and totally give up your Jewish identity, which often meant that you didn’t tell your kids that you (and they) are Jewish. The second option was much more popular.

Réka: Imagine building, working in such a Jewish community: your grandparents survived the Holocaust, they never learned to trust a non-Jew or to be OK with being “openly Jewish”… if you try to go outside with a Magen David charm, your grandmother will come and cover it, saying, “it is dangerous”. Jews might feel that it’s important to have a Jewish community, but they are afraid. You just don’t have your parents’ generation. Can you imagine a Jewish community with a huge age gap? Your parents don’t have any connection to Judaism; they feel that it is stupid, useless or even harmful. And there is your generation, people up to their late 30’s, who are there, looking for answers and willing to work, but no one is there to educate, teach and help. Not to mention that in Hungary everything comes from state money (the rabbis get their salary from the state!) so nobody is willing to contribute financially to the Jewish community. And on top of that, volunteering was obligatory during the Communism regime so people have very negative associations with it.

Th&Th: Can you tell us a bit about your family?

Réka: I was born in a mixed family: on my mother’s side I am a third generation Holocaust survivor, on my father’s side I am descendent of a Transylvanian, Hungarian noble family (Catholic of course). I grew up in a totally assimilated, atheist environment (my father left the Church after my physicist grandfather got himself excommunicated; my mother never had any kind of religious background).

Th&Th: So how did you relate to your Jewish identity?

Réka: I got to know that I was Jewish at the age of eight, when my grandparents brought me to the great synagogue of Budapest (one of the largest in the world) on Yom Kippur. It was huge, and beautiful, lot of gold and the lights everywhere, it amazed me. Some years later I went to a JDC summer camp where I first started to learn about Judaism and I can’t really explain… because I am a scientist… I don’t believe in these kind of things, but I just immediately felt that Judaism is my way. I never felt I had a choice… I didn’t choose this – it was mine from the moment I met it.

Later, especially after my Taglit-Birthright trip I got involved in so many Jewish organizations, Limmud Hungary, Jewish Agency, JCC, Israeli Cultural Institute, etc. I always knew I wanted to study “Jewish stuff” seriously so I honestly feel that these years in Israel are the most important of my life, and would like to get as much out of them as possible…