A few weeks ago, my school took a trip to Hevron.

Hevron is a holy city in the West Bank, south of Jerusalem. It is notable for being the burial site of the biblical matriarchs and patriarchs (the Me’arat ha-Machpela, Cave of the Patriarchs). While being an incredibly significant religious site for Judaism, it is also a very important site for Christians and Muslims.

But unfortunately, Hevron is notable for another reason. It is one of the most complex and complicated areas of Israel, and perhaps a representation of the Israeli-Palestinian conflict at its worst.

First, a bit of background about our trip. As I understand it, the goal of our trip was to see Hevron, visit the Cave of the Patriarchs, and to offer us a nuanced perspective and hear from multiple points-of-view about the current reality in parts of the city.

We heard from many different people throughout the day, including:

The first speaker said that we would probably leave Hevron with more questions than we had answers. We would leave with more confusion than we arrived with. We would feel more frustrated at the end of the day than we felt at the start.

She was right. But my biggest reflection of the day? Peace never felt so far away.

There is suffering, grief, and pain on all sides of this conflict. In Hevron, I could not only see it, but I could feel it. There is bitter debate over who has the “rights” to be there, and who should have control over the Cave of the Patriarchs. In this particular area of Hevron, the hostility has escalated to a situation where there are separated streets, wire cages on windows, and armed soldiers on every corner.

Hebron wasn’t always this way. The population used to live in relative coexistence up until the last 20 years. Some of my teachers talked about how they used to go to Hevron and shop in the Arab markets there.

How did this happen? How did we get into a situation where people (on both sides) have to fear violence every day? Where people are afraid to leave their houses? Where soldiers need to walk around with machine guns and riot gear?

And on a larger scale, what do you do when you have two groups of people with two conflicting narratives? And when the majority of people on both sides want peace, but a despicable few act on their hatred? What happens when, by ensuring the safety of one group, another group’s welfare is affected? And just because you have certain “rights,” what is the price you pay for exercising them?

Obviously, these are not new or unique questions. And they are not easy questions. This is the conflict. 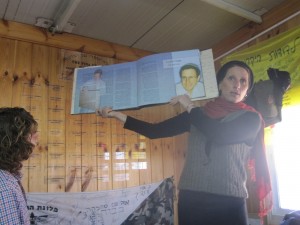 On our way to Hebron, we stopped at a small coffee “shop,” called Pinna Chama, that is a place where Israeli soldiers can go to get free coffee and snacks. It’s run by volunteers. Pinna Chama was established after a family lost their loved one in a roadside bomb attack. They wanted to create a warm place that soldiers could visit when they are in the area. 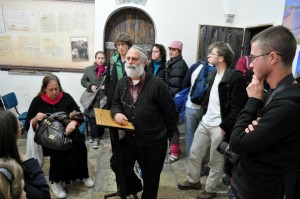 This gentleman spoke on behalf of the Jewish community in Hebron. When asked what his vision is for Hebron, he said, “to live here normally, to live like people live everywhere else, to live without carrying a gun, to live peacefully with my neighbors.” 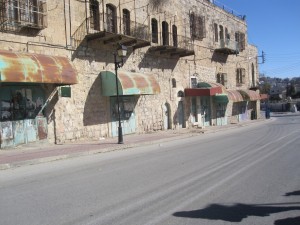 This is a street in H2. Because of the division of the city of Hebron, these Palestinian shops were forced to shut down, essentially creating a ghost town. Also, Palestinian residents on this street are not allowed to leave out of the front doors of their houses. 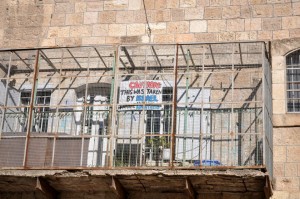 The sign says “Caution: This was taken by Israel. This is Apartheid.” Many of the Palestinian homes/apartments have wire cages around the windows to protect them from violence. 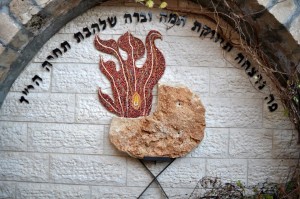 This is a memorial for a Jewish baby that was shot by a Palestinian militant sniper during the Second Intifada. 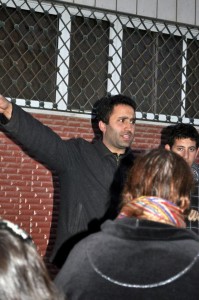 This gentleman spoke on behalf of the Palestinian community in H2. He hopes that Hebron will be a part of a future Palestinian state, and wishes to live in peace and security.

Why did I start out this blog post with a quote about peace, if Hevron gave me a feeling of just the opposite?

Every day, there are examples of co-existence and peace all around Israel. There are many people who have made it their life work to foster co-existence, peaceful relations, and understanding of the Other. While there are areas of extreme conflict, like Hevron, there are also places that are true examples of what peace could look like.

I admire my school for taking this trip. It is not an easy place to go, nor is it an easy place to discuss. At Pardes, we have students, faculty, and staff that stand at all points of the political spectrum, and some individuals have very close and personal connections with Hevron. But what has become clear to me is that we are all “pursuers of peace” in the best way that we know how.

Since the trip, there have been many conversations, both formal and informal, about the experience in Hevron. While people may vehemently disagree with each other, there has been overall a respect and a willingness to listen. Perhaps by listening to each other, by challenging other, we can be, and can encourage others to be, “pursuers of peace.”

At least it’s a start.