I just had the immense privilege of watching Footnote (הערת שוליים) with some fellow Pardesniks followed by a discussion with faculty who have intimate personal knowledge of the culture being described in the film.  First, I highly recommend watching the trailer and, if you are even remotely interested, watching the movie before reading what I have to say (in other words: spoiler alert).

Good, now that you have watched the movie, and understand why it was nominated for an Oscar (and wasn’t a film watched exclusively by those of us who think that Hebrew University’s Talmud department must be one of the coolest places on Earth), 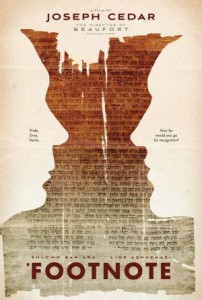 I think there is a lot to say about the film’s underlying messages, and I would like to focus on the theme of truth in the academic study of ancient texts.

Eliezer Shkolnik (namely, the father) represents a modern view of academia, which, when paired with the setting of the most prestigious Talmud department in the world, drives the message home to the point of absurdity.  He is portrayed as wanting nothing more than to discover the “truth” of Talmudic manuscripts, and is described by others (though whether the character himself exemplifies this in the film is questionable) as being a man of the highest integrity.  Nothing matters more than arriving at the “truth” and that includes (but is not limited to) the relevance of the truth, the meaning that results from one’s findings, and one’s family life being less important than truth.

Uriel Shkolnik (Eliezer’s son) exemplifies a much more post-modern understanding of the purpose of academia.  If manuscript authenticity is important in the study of ancient Jewish texts, it is as a means to an end, and no more.  The goal is to tease out a message, to find meaning — and, most importantly, that truth may sometimes be neglected in the face of moral considerations.  The movie was extremely well-researched, according to the sources I heard from after seeing the film, and one aspect of that attention to detail can be seen in that Uriel’s brand of studying Jewish texts is undoubtedly more popular today than Eliezer’s.  It is hard not to see why.

Beyond the fact that the real people occupying the chairs of the Shkolniks are getting paid to do what they do, and therefore one would imagine that they must have an obligation to share the knowledge that they gather, one wonders when observing the work of an Eliezer Shkolnik: what is the point of the text under discussion?

This is where I think it is so important that this film brings a Jewish context to a question that can legitimately be asked of any academic discipline involving texts old enough to have manuscript variations.  Because it is a question that should never leave one’s mind — as a student or teacher — when studying Jewish texts and according them the respect they have traditionally been paid in our tradition.  These are not novels, and we are not trying to uncover whether Shakespeare existed or if Socrates’ wife really was the mastermind behind all the philosophy ascribed to her husband.  For the vast majority of the Jews who have ever studied these texts, they are the word of God and God’s chosen people’s best attempts at interpreting that word and putting it into practice.  It is in this context that I can see why it might be worth devoting one’s life, if the passion for this work is present, to the pursuit of simply uncovering the most historically authentic version of any of these texts.  Leave the meaning-making to someone else, so long as there is a department devoted entirely to ensuring that the rest of the (Jewish) world has access to only the most cutting-edge tools that can produce the ‘real’ text to be proliferated to students everywhere.

For me, though, even believing that Jewish texts have and will continue to play a monumentally important role in my life, I strain to see why this level of scrupulousness is really beneficial.  Yes, it is important (and sometimes just interesting in the way that arcane academese is) to know that Rashi oftentimes had different words in front of him when commenting on the Gemarah than we do now — to study our tradition’s texts without the awareness that they have changed over time, as all texts inevitably did, at least until the advent of the printing press, is the height of naivety in my opinion.  However, this does not justify searching for some ‘truth’ in those texts to the exclusion of applying the messages that the texts are meant to convey!  Why were these texts written if not to guid us in living a moral (or halakhic, if you see a meaningful difference) life?

Jewish texts have always been the key to transmitting our cultural and religious values to future generations.  Like it or not, the style and wording of the Vilna Edition of the Babylonian Talmud is here to stay, even if it is lacking in ‘truth’ as compared to other manuscripts, simply because it was codified by the printing press as the standard version of the Gemarah.  What I find more interesting than preserving shards of the different versions of ancient Jewish texts is observing how Rabbinic Judaism artfully excises, refines, and changes the normative Jewish values of their time while remaining faithful to the tradition, firmly rooted in the text.  The most famous example is that of the biblical commandment of “an eye for an eye” (Shmot 21:24) [An in-depth discussion of the details of how the rabbis obviate this particularly troubling injunction of the Torah will have to wait for another time, but I want to note that I find this understanding of Jewish textual interpretation to be very compelling].  The Gemarah explains away the morally problematic commandment by saying that the Torah meant monetary compensation.  I have little doubt that the Torah in fact did not mean monetary compensation, but that the rabbis were as concerned by the literal implication as modern readers are, and set out to correct that moral imbalance in the way they knew best: while staying within the text, they changed the Jewish moral code.

Returning to the topic at hand, I simply do not see the goal of producing or studying Jewish texts to be to arrive at the ‘truth’ of what they said.  This cannot be more than an intermediate step towards bettering ourselves morally (paraphrasing Uriel: “That [what my father does] is not Talmud study, it’s masturbation!”).  Judaism, as a religion, has been extremely adept at maintaining a culture over millennia that, arguably, has no business being alive and as vibrant as it is in the year 2012.  It was only preserved through the embedding of meaning in Jew’s everyday lives, as without a real cultural glue, I cannot imagine why 2,000-year’s-worth of Jews stuck with it in the face of persecution and hardship. [I am aware that I am making broad statements, but my goal is to paint a picture that would take too long to explicate precisely in a blog post, and I am willing to sacrifice the ‘truth’ of every claim I make in order to imprint a little meaning in the discussion]

There is so much more to be said about this film, and other topics may be discussed in future posts, but for now, I think that it is extremely important to reflect on what role ‘truth’ plays for us, in daily life and especially in the classroom.  Post-modernity may indeed have gone too far in throwing all claims to Truth out the window, and I write consciously from a worldview heavily affected by its influence.