Posted on October 12, 2012 by Heather Kantrowitz

Shalom friends and family! From Rosh Hashanah until Sukkot we were without internet at the house, hence the lapse in blog posts. Anyways, it’s back now (after a long and frustrating process) so I’ll try to summarize everything that’s been happening in my life in the past few weeks.

1) Yom Kippur in Israel… quite the experience. Almost everyone was wearing white, and people walk everywhere in the streets because there are no cars at all on the roads in Jerusalem. Kids were also riding bicycles and scooters… right after Kol Nidre it was absolute insanity and made for some awesome people watching!! One of the highlights of Yom Kippur for me was at the very end of Neilah, after fasting for 25 hours, when we began to sing “L’Shana Haba’ah B’Yirushalaim” (Next Year in Jerusaelm) and realizing that, after 25 years of longing to live in Jerusalem, I was finally here and doing it. Everyone in the room was filled with so much energy and enthusiasm to be there, even after a long day of fasting and praying. It was a wonderful experience. My roommates and I then hosted a break the fast potluck in our backyard and had a great time with our Pardes friends.

2) Tiberius… Since my friends and I couldn’t find cheap travel deals outside of Israel, 5 of us found a relatively inexpensive weekend at a spa in Tiberius (along the Sea of Galilee/Kinneret) and decided to go for a girls’ weekend. It’s about 3 hours away from Jerusalem and is kind of like the Jersey Shore, complete with a boardwalk and disco cruise. It was so interesting… there wasn’t a lot to do there but we explored a local nightclub, drank wine on the beach with Israelis, and generally relaxed and enjoyed the pool for a few days. Here’s a picture of some of us in front of the Kinneret after a long day at the pool!! 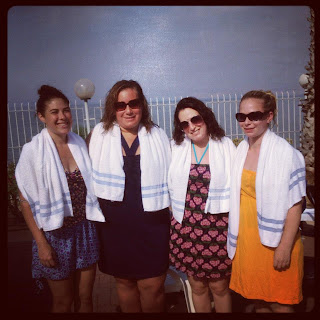 3) Sukkot… Sukkot in Israel is really amazing, all over the place little temporary booths pop up – almost every apartment with a porch, balcony, or yard has one, and restaurants build them on the streets for people to eat in for the week. Everyone gets invited to friends’ houses for meals and parties, and it’s a really social holiday. I also got to visit my family in Beitar Illit for a few days while the whole family was in town, so it was really nice. (For my non-Jewish friends: Sukkot is a harvest festival where we construct temporary shelters like the Israelites did in the desert and “live” in them for 7 days.) At the end of Sukkot is Simchat Torah, where we celebrate the end of Deuteronomy and start again at Genesis. There was a lot of revelry and fun to be had by all.

I’ve also discovered the Malkha Mall which is about 10 minutes away by bus… possibly the best/worst thing that could have happened to me this year. Anyways, hopefully my precious Seminoles will recover from our devastating loss and be back on top in no time, and I look forward to making a new blog post in the next few weeks!!