Posted on October 18, 2012 by The Director of Digital Media 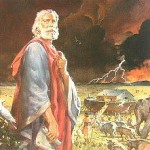 This week marks the 9th anniversary of my mother-in-law’s passing.

Laura suffered most of her adult life from Multiple Sclerosis, a disease that slows down or blocks messages between the brain and the body and causes – amongst other symptoms – visual disturbances, muscle weakness and thinking and memory problems. While there are treatments that can slow the disease, there is no cure for it.

I was only privileged to meet Laura during the final months of her life. But while I didn’t get to spend a lot of time with her, I was privy to observing her recite Birkat Hamazon numerous times. Being in her company during those moments was inspirational, as it seemed to me that I was in the presence of a Tzadika (righteous woman).

The term tzadik shows up for the first time in Jewish literature in the first verse of this week’s parsha, as follows:

Rashi explains that the seemingly extra words תמים היה בדורותיו should be seen as a qualifier of Noach’s Tzedek, and he summarizes a midrash that provides two contrasting views of its quality.

One interpretation in the midrash reads the verse as follows:

תמים היה Whose Tzedek was complete

בדורותיו Relative to his generation.

Noach was a tzadik only in relation to his generation. Were he to have lived at another time when there were other good people, he would not have been considered a tzadik.

This option significantly reduces Noach’s Tzedek so that he fails to provide a model for us to emulate.

The second approach reads the verse as follows:

תמים היה Whose Tzedek was completed

בדורותיו Even in his generation.

Noach was a tzadik despite his generation. It presents his Tzedek as so great that even the worst generation in the history of mankind was unable to detract from it. This option offers the greatest praise for Noach’s Tzedek but leaves us unable to relate to him, because Noach seems unaffected by his experiences.

Having reflected on this midrash while thinking of Laura, I would like to propose another reading of the quoted pasuk:

תמים היה Whose Tzedek was completed

בדורותיו During (over the course of) his generation.

Noah’s Tzedek was always there. Yet it evolved and developed over the course of his generation because, each time he overcame the challenges and obstacles of the surrounding wickedness, he moved a step closer to the full potential of Tzedek.

And the Torah makes special note of him because it wants us to recognize that all significant achievements comes only after great perseverance. As such, even the negative parts of life can be positively transformative.

Laura’s battle with MS presented her with many challenges and obstacles so that even the “simple” task of giving thanks for a meal was complicated for her. Imagine the theological questions that one must have running through one’s head as a result of the disease. Imagine the struggle to eat and digest food. Imagine the frustration of being legally blind and unable to read (Laura required a large-print Birkon and magnifying glass to read the words). And then imagine the determination that it must have taken to overcome all of this.

While MS is a horrible disease, Laura battled it. In the process, she transformed her practice into something special – something inspiring.