I have been prompted twice this year so far to share these poems – once inspired by Rav Landes Shabbat Shuva Shiur and then after I read them at Salon Pardes.

I wrote these as part of my final project for an Aleph Rabbinical School class exploring the concept of tzimtzum in Jewish texts.  My aim was to weave together images and understandings from the class.  You can find more of my poetry on my website: http://www.anniegilbert.com/writing.html 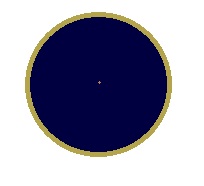 The first poem is a journey through Tzimtzum imagery.  Exploring Lurianic and Nahmanic creation stories, as well as other Tzimtzum motifs.

One of the reasons I took the course was because of an affinity for Tzimtzemai as a name for Gd.  The second poem is an interplay between the story I learned in Kohenet about the journey of Tzimtzemai/Shechina from the broken temple into exile in the wilderness where she is waiting for our return and the themes of Tzimtzum we explored in class.

In the very centre of the universe

Radiant light of the cosmos

Honed to a pricking point of judgement

The sharp tip of Michael’s sword

Guarding the corners of Eden

The gateway to the Holy of Holies

The keruvim hold the space inside space

The closeness between them a charged emptiness

They tighten their embrace

Exploding the very vessels of creation

And scattered across the floor

Each shard is porous

Of the hand of Gd

Held against my forehead

To shield my eyes

From the blinding rays of universal light

Concentrated to a bright speck

Against the expanse of the sky

After years of rocking through the wilderness

Folded in the cradling arms of My Levites

I yawned and stretched into the expanse

Between the Shaddaim of the Holy of Holies

I rose from the Temple ruins

Inside the cracks and crags of the tallest mountains

In the deep earth of dry riverbeds

In the nucleus of the rock

That was the pillow of Israel

When he lay down between his past and his destiny

Between the rungs of Jacob’s ladder

Through the skirts of My angels climbing

In and out of the world

I am the black, starless place

In all the in-betweens

In all the worlds

Left empty for you to step inside

Left empty so you can walk around in it

And feel My presence in all the salted corners

Between the heart of the world and its leading edge