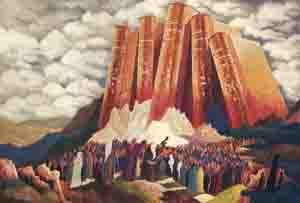 In last week’s Parsha, Yitro, we left B’nei Yisrael at Mt. Sinai, having just received the Ten Commandments directly from the mouth of God. Most would agree that they are reasonable commandments, which aim to help this newly freed people maintain order and positive values as a newly minted nation. Switching gears immediately from the pomp and circumstance of Yitro to the ostensibly mundane detailed laws of Parshat Mishpatim, we read of Moshe placing the laws before B’nei Yisrael: “And these are the laws that you [Moshe] shall place (תשים) before them.” (Ch 21:1). In a very straightforward manner, Rashi explains that Hashem commands Moshe to place the laws before the people, along with their explanations, just as one would set a table, with all its food ready for eating. In other words, Moshe’s responsibility is to make sure that each person knows the new laws and their underlying principles and meanings, so that the people would be able to apply them properly, and immediately, in various “halachic” situations. For two chapters, the Israelites are presented with dense legal information, and undertake the burdensome task of trying to learn and understand them. They must have been extremely inspired, for why else would they have invested so much time and effort to learning the new lay of the land? The exciting conversations that must have ensued probably sounded a lot like our Pardes Beit Midrash discussions, as the people tried to understand the new laws and their importance.

Then in Chapter 24, Moshe anoints the altar with the blood of a bull and throws the rest of the blood on the people. He reads the Book of the Covenant within earshot of the people, and they proclaim, ונשמע נעשה (we will listen and we will do). Mazal tov! You are now a people. One can almost see them stepping on a glass as the band starts up and the dancing begins. As Moshe, Aharon, Nadab, Abihu, and the seventy elders ascend Mt. Sinai to see God, B’nei Yisrael is left behind to process what has just transpired. Feasting commences, as the 11th verse states that, “…they gazed at God, yet they ate and drank.” According to Onkelos this feasting was favorable, as it enhanced the joy they felt upon seeing the visage of Hashem, and enabled them to physically enjoy the experience. Ramban also comments on what a significant spiritual privilege it was for the people to have been allowed by God to see their redeemer, the master of the universe.

But there seems to be a large imbalance in the Parsha. The Tanach spends two full chapters explaining the laws that B’nei Yisrael must learn in order to be a society, and only half a verse describing B’nei Yisrael looking and gazing upon God. How can such a noteworthy event get such little press? I believe there is a message for us in this purposeful inconsistency, that we modern, halachically-minded Jews should learn. Rules and laws are necessary in order to keep a society functioning through order and structure, that’s a given. As Rabbinic Jews though, we often times get very focused and caught up in the law without simultaneously turning enough of our “gaze” to God. All too often we forget to talk about not just God, but our vision of a personal God, and the status of our relationship with God. I imagine that after B’nei Yisrael sees God, they must have discussed their feelings about the experience to no end, and shared in the joy of this climactic Jewish historical event as a community. Yet the Torah doesn’t write about this.

I have shared a myriad of Shabbat meals with close friends and fellow Jews, the kind of meals that could only be created with an understanding and adherence to the laws of Shabbat. Out of all those Shabbatot, I can count on one hand the number of conversations I’ve had about personal concepts of God and the status of our relationship with God. As a community, I think we would benefit greatly if we learned to discuss our personal perception of the God we envision in our lives. Mishpatim tricks the reader into thinking that the emphasis is on law, when it actually wants to call our attention to B’nei Yisrael’s gazing on Hashem. By minimizing this part of the story, the Torah has actually maximized it. While we are clearly an extremely detail-oriented people, very focused on the laws, we need to remember to turn our focus towards God. By being in a relationship with God (however one defines God) the meaning of the laws maintain clarity and meaning in our lives. Without the infusion of spirituality within law, we run the risk of becoming empty followers who miss out on the bigger picture.