Posted on February 23, 2013 by The Director of Digital Media

Purim is here!  Which means lots of dressing up in costumes.  In many cultures there seems to be at least one calendar day dedicated to dressing up in costumes: Holloween, Dia de los Muertos in Mexico, Carnival in Brazil, and Purim here in Israel.  The one thing these days, among others I’m sure, have in common is that we all get to pretend to be something we’re not.
I personally love to get dressed up, Matt less so.  But Matt did some of his own “dressing up” this week as his Maritime Survey Methods class went out on a boat, and Matt had to wear a wet-suit. 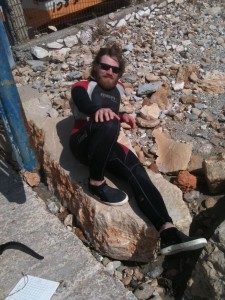 In the course the students learned how to locate, map out and excavate archaeological sites, both on land and underwater.  This was great for Matt because his absolute favorite thing to do is go on boats! (read that last sentence with the heaviest sarcasm you can muster).   Doped up on Dramamine  Matt was at least able to enjoy the beautiful views of the Israeli coast from the water.  Although he doesn’t (yet) scuba-dive, he got in his fair share of swimming and snorkeling, and did as much as he could in the water to run the equipment and help out the divers.  A little sunburned and a little oozy, I think he is happy to be back on dry land.

Now back to Purim.  For the last couple years in Chicago we haven’t had to worry about coming up with our Purim costumes.  Thanks to the creative genius of our Rabbi’s two young daughters, we have been part of a Disney themed group costume.  It started out with Aladdin where I was Jasmine and Matt was the Sultan (the girls told him he couldn’t be Alladin because he was too hairy and the shirt-less costume would not be appropriate for shul) and one of the girl’s was the Genie.  That was followed up by Cinderella, where the girls played Cinderella and one of the step-sisters, the Rabbi was Prince Charming, I was the Fairy Godmother, and Matt was the pumpkin that turned into the carriage.
As Purim approached this year we were sad to think that Team Disney would not be dressing up together now that we live so far away.  That is, until we got the most amazing letter in the mail about a month ago.  The girls wrote us a hand written card with their Purim costume suggestions!  Even though we no longer live near them, they still wanted to continue our group costume tradition.  And this year’s theme is… Beauty and the Beast!  We wrote the girls back (a hand written letter of course) that it seems obvious that Matt should dress up as the Beast since he already had the hairy part covered, and I, as per their suggestion, would dress up as Mrs. Potts, the dancing, singing tea pot.  With a little creativity, some ribbon, fake fur and pins, this is what we came up with:

We are waiting with great anticipation to see what our costume-mates come up with.

Wishing you all a Purim Sameach, Shabbat Shalom and a great weekend!
Stef and Matt