Posted on March 20, 2013 by The Director of Digital Media

One Shabbat morning, the rabbi entered Torah study and, instead of launching into the text, looked intensely around the circle of people gathered there. “I want to know how you feel about Israel,” she said. “However you feel is fine, but you have to say.” When it became clear that we would be expected to speak in turn, I started to sweat. I had only converted to Judaism weeks before, and the ground underneath my feet had not stopped shifting.

Jews are generally expected to support Israel, but we’re not often asked to declare our exact positions publicly. In fact, many born Jews are not pinned down on the subject and asked to pledge loyalty to Israel the way converts are. I have always-Jewish friends whose opinions about the place range from “Meh” to hard-right Zionism.

To the rabbi’s question, I answered that I didn’t feel qualified to comment, as I had not yet set foot in Israel. That may seem like a dodge, but it was true and it planted the seed in me, the desire to go to Eretz Yisrael. I continued my Jewish studies, became a Hebrew teacher and got a pararabbinic certification at Hebrew Union College. But it was to be a long time before I got to Israel.

Somewhere in my studies, I learned of the concept of derekh eretz, the way of the land. For us, as American Jews (and for me, who lives where Jews are a vast minority), the concept of derekh eretz seemed to be not only about how to live as a Jew but how to live as a Jew in a place where not many people are Jewish. Here, you have to seek out your fellow yehudim, get involved in synagogue life, join the Jewish organizations, really make an effort.

One day, while visiting at our local Jewish day school, I saw a brochure for the summer program at Pardes. Hmm… that could be just the thing, my ticket to the Promised Land. I signed up, dusted off the passport, and stocked up on sunscreen. I was excited, but I didn’t know the emotional impact that touching down on the soil, being “ba’aretz,” in the land, would have. Disembarking was really embarking, and I was weeping.

The way of the land, derekh eretz, has an urgency in Israel that is missing at home. Perhaps it is the antiquity of the place, or the fact that its security is always an issue, or that your feet are treading the same soil as the people you study in the Torah walked.

As with most things in Hebrew, there is much discussion about what derekh eretz really means. The plain translation to English may be “the way of the land,” but how does that play out on the ground? It’s mentioned in Pirke Avot 2:2, “Beautiful is the study of Torah with derech eretz…” and is generally taken to mean that, in addition to knowing the law, you have to earn a living and be a mensch. The phrase was later taken up as a banner Rabbi S.R. Hirsch to describe a world view of embracing modernity, secular education, and Western culture, combined by strict adherence to the mitzvot.

Coming to Jerusalem, and to Pardes, helped me to connect in a deeper way to my Jewish self, with my feet more firmly on solid ground. The learning came both in the beit midrash and from being in the land, surrounded by my people, being a Jew in a Jewish place. Truly understanding derekh eretz may be just has challenging in its original language as in translation, and walking it out is just as important, wherever we are in the world. No matter our individual level of observance, we are still compelled to live ethically as Jews and as citizens. Just as important is the way we treat each other as Jews, and that’s not always kindly enough.

If you haven’t been to Israel, go. You will surely feel more connection, more challenge, more urgency. You may also be quite surprised to find a new career there, as I did. More about that here. 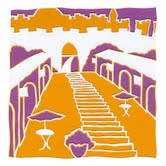