[Alumni Guest Post] Into This Breach – by Rabbi Joshua Ratner

Posted on April 6, 2013 by The Director of Digital Media 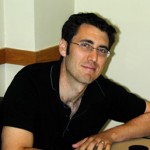 R. Joshua Ratner (Pardes Year ’98-’99) is the rabbi of Congregation Kol Ami in Cheshire, CT. Ordained by the Jewish Theological Seminary in May 2012, Rabbi Ratner was a Joseph Neubauer Fellow and also earned a Master’s Degree in Midrash and a Certificate in Pastoral Care. He also worked as an attorney for five years prior to entering rabbinical school. He has received training in congregation-based community organizing and was part of the original rabbinical student cohort of Rabbis Without Borders fellows. He and his wife, Dr. Elena Ratner, are the proud parents of Dimitri, Eli, and Gabriella.

“Dad, why did they have to die? Why couldn’t God have just injured them a little bit?” My boys and I were discussing this week’s parashah, Parashat Shmini, in which Aaron’s eldest sons, Nadav and Avihu, get vaporized by Divine fire after offering “alien fire” incense offerings to God (Vayikra 10:1-2). This episode of seemingly extreme, disproportionate punishment for an unclear violation has perplexed commentators for millenia. The famous 10th Century French exegete Rashi, citing the midrash, suggests that their death resulted either from Nadav and Avihu making a legal decision (to bring their own fire to the altar) without first asking their teacher Moshe, or because they were drunk when bringing their offerings. The midrash in question, Vayikra Rabba 20:6-10, brings no less than twelve different justifications for their punishment. I tried offering some of these explanations to my eldest two sons, but in the end, both I and my boys realized that the midrash doth protest too much: no explanation is morally or emotionally satisfactory for the instantaneous death sentence they received.

So what then? What do we do with such a troubling episode? One of the common criticisms levied against God in the Hebrew Bible is that God is cruel, quick to anger and destruction, and merciless. From the story of Noah and the flood in Bereishit, when God wipes out all of humanity, to the Shemot narratives in which God is responsible for massacring Egyptians, Amalekites, other enemies of Israel, and thousands of sinning Israelites as well, the God that emerges is primarily a God of vengeance, of fire and brimstone, rather than the God of mercy and compassion. For those of us who value compassion over harsh judgment, it can feel difficult to relate to such a God.

One of the things I am most indebted to about my time at Pardes was the opportunity to discover a literary approach to biblical interpretation. My teacher, Judy Klitsner, taught me to read the Humash closely, with an eye towards context and other tools of Western literary intepretation. This skill set, which I was able to expand upon in my rabbinic studies at the Jewish Theological Seminary in New York (not only to Humash but also to Mishna, Gemara, and other facets of Rabbinic literature), has enabled me to grow closer to our rich textual heritage, to find fresh meaning and insights every time I return to seemingly familiar words. 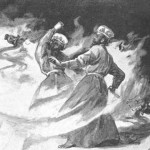 As but one illustration of this, I believe a closer reading of the story of Nadav and Avihu, including its aftermath, reveals a different depiction of God. Immediately after his sons are killed, Aharon is in a state of shock. Moshe, the quintessential man of duty and leadership, offers some vague words of support, and then orders Aharon back to work. Moshe coordinates the removal of Nadav and Avihu’s bodies outside the camp, and forbids Aaron and his remaining sons from mourning. Instead, Moshe insists that Aharon resume his role as ritual leader of the community. Moshe tells Aharon that the Israelites will mourn for Nadav and Avihu instead, as if Aharon can somehow transfer a father’s grief onto the populace. His response leaves Aharon trapped in silence and despair. Moshe, whose own family life left something to be desired, doesn’t seem to get it.

But God does. In Vayikra 10:8, God speaks to Aharon, telling him not to drink wine or other intoxicants when Aharon enters the Tent of Meeting. There are two crucial things to recognize about this brief speech. First, we have to appreciate the context: this is the first time God speaks directly to Aharon. God chooses this moment to establish a new relationship with Aharon. God knows that Aharon is feeling isolated and alienated. God steps into this breach to let Aharon know that he is not alone.

Second, the content of God’s message, I believe, also carries a powerful message. Whenever we suffer loss or tragedy, there is a powerful incentive to mask our pain. Alcohol and other drugs of intoxication are the easiest ways to do so. What God tells Aharon, through this new command of abstinence, is that God wants Aharon to grieve, not to dilute his grief with alcohol. God knows that Aharon needs to be able to process this grief if Aharon is to move forward with his life and the sacred work to which he has been entrusted.

We may never be able to answer the question of why bad things happen to good people. Attempts to do so, as I tried with my children yesterday, as I did when my father passed away two years ago, and as I am sure you have done when bad things happened to you or your loved ones, often run hollow. The explanations we come up with might satisfy us intellectually but rarely do emotionally. But the message of our parashah, I believe, is that even in the face of the worst tragedy, God stands ready to be in relationship with us. Even if we have never spoken with God before, even if we feel estranged from Judaism or spirituality, God is present and available if we are willing to hear.

May each of us be blessed, in times of tragedy as well as blessing, to draw ever closer to God, so that our lives, too, can be graced with sanctity and holiness.