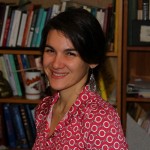 A few weeks ago, when the current Pardes students asked me to write something for this blog, I planned to write about how the two years I studied there changed my life. How I was, at twenty, a secular American Jew hungry for spiritual wisdom, cobbling together rituals based on the few blessings I knew, reciting the Kiddush over beer on a Friday night in my college dorm room. How a chance encounter with an Orthodox student led me to Pardes, where I was introduced to the depth and beauty of Torah, and fell in love. How I now strive to bring some of that electric energy and excitement to my own teaching, and also to my work as an artist, in which I often build on Jewish texts and traditions. And how I am eternally grateful to Pardes for creating a space where I could dive deep into Torah without having to pretend to be anyone other than my young, eager, critical, exuberant self.

I thought I’d write about the palpable holiness of studying after-hours during night seder and on Shavuot – that feeling of navigating the depths while others sleep, and how it reminded me of the weeks I spent living on a boat in the middle of the ocean during my junior year. Or about the daytime energy of the beit midrash, the French press and bag of coffee grounds my chavruta Marc and I kept in our locker to fuel our learning sessions, my exhilaration as we dug into Talmud, the compassion and brilliance of our teachers. Or about the Shabbat dinners I hosted with my dear roommate Jill that first year – we couldn’t afford a table, so our guests ate on my twin mattress, which we flipped over and covered with a length of leopard-print material we’d bought in the shuk. I thought I’d write a simple love letter to Pardes. 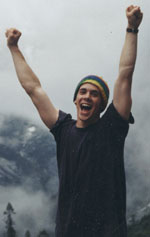 But this past Sunday, Peter Avniel Salzman passed away. Those of you who knew me in Jerusalem know how close we were during the years I was at Pardes; I loved him, as did many of you. He was 38 years old. So, with a heavy heart and the knowledge that my words are insufficient, I will write a few words in Peter’s memory.

I had been singing Peter’s songs for months by the time we met. Jill and I were hosting Shabbat dinner at our apartment, and a fellow Pardes student had asked if we could include an old friend of theirs who was studying across town—“Actually, he wrote that beautiful Tzur Mishelo everyone sings.” I’d said yes, of course, I love that song, and then forgotten.

We were in our tiny kitchen, racing around to finish preparing the meal before sundown when someone knocked on the door. It was too early; we weren’t ready; I opened the door with barely concealed annoyance; and there he stood, with luminous blue eyes, pale freckles, and a loose black suit. Something shifted and I understood the power of that melody. We stared at each other for a moment, then he smiled shyly. “Uh, sorry I’m so early – I had to take the bus before Shabbos, I go to a yeshiva across town, and…” “It’s OK, come in, welcome” I said, and he stepped across the threshold.

I am not given to grand pronouncements but I believe that if there are prophets, Peter may have been one, though I am certain he would deflect this sort of statement with a joke or a Torah line about false prophets.

We recognized each other as kindred spirits immediately, but I sensed early on that in some way, we were not peers. Although Peter was only a couple years older than I was, he was perhaps the greatest spiritual teacher of my life. I knew more Hebrew than he did, but could only begin to glimpse his understanding of Torah. I was a trained musician, but his simple niggunim had spread across Jerusalem in a matter of months, elevating Shabbat meals all over the city.

Peter was a true mystic. He was equally devoted to Rebbe Nachman and the Wu-Tang Clan, to devotional meditation and social justice. He was equally at home with ultra-orthodox Breslov families, strict Buddhists, and anti-racism activists. He was down-to-earth, funny, and kind, and generous, and compassionate. You can hear it in his voice – it is a great blessing that he left us these original recordings of his songs.

Even at twenty-three, Peter’s age when we met, he possessed spiritual vision, and an ecumenical ability to see through idolatry–including religious idolatry. He introduced me to the teachings of Chogyam Trungpa (sort of the Tibetan Buddhist version of Shlomo Carlebach). Trungpa warned his students about spiritual materialism, that our desire for spiritual achievements can be just as dangerous as our longing for wealth. This, in Jerusalem, was radical wisdom of the sort I recognized from my favorite passages of Talmud – challenging power structures and religious calcification, both systemic and personal, from a place of profound faith.

And, needless to say if you’ve ever sung his niggunim, Peter understood the connection between holiness and music on a profound level. Together, we learned Rebbe Nachman’s teaching Azamra over and over: “I will sing to my G-d with the little bit of good I find in myself,” for no matter how much we find to dislike in ourselves, there is no person who does not contain a spark of goodness, of beauty, within. And that is where music comes from.

Peter understood the mystical struggle with unseen forces, and the messianic hope for healing. My words cannot do his soul justice. So I will leave you with Peter’s own words, with the last paragraphs of his Wesleyan College thesis about his pilgrimage to Uman for Rosh Hashana with the Breslovers:

With the following words of the Rebbe, I conclude. They come from one of his stories called “the Humble King”. They were the first of his words I had ever read. I had never heard of Rebbe Nachman before and I had no idea a community of his Hasidim still existed:

Do you trust that laughter? I mean, is it possible for a rational being to have faith in the wisdom of that kind of center and the one laughing from within it. Can you hear the joy in that laughter? I mean, is it possible to understand how this laughter is not a mocking laughter but a healing one. This thesis argues, “do and you will understand.” In other words, hearing and appreciating the joy in that laughter comes through the learning process of tshuvah which requires learning through doing and coming to faith through practice. When Baruch said, “you are responsible for the distance you keep,” I think he was saying that if you are not willing or able to live his way of life, don’t judge it or think that you can say what it is. If you are willing however, there is a space for you — even today, if you but heed His call.

May his memory be a blessing.