On Those We Love 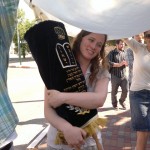 I also am going to talk about lashon ha-rah, specifically the consequences of it. I believe that the most telling understandings of a relationship come from watching the arguments, and that likewise the most penetrating insights into a personality come from the moments of deepest stress. For example, take our favorite “power trio” of Moses, Miriam, and Aaron. For the majority of the time that we see it, this relationship runs like a well-oiled machine: strong, united, and in synch. Moses and Aaron present a united front against Pharaoh and the rebellious among the Bnei Israel, and Miriam stands as both a protective guardian and an emissary to the women of the camp.

And yet, as is often true with siblings, when there is a falling out, it is vicious. “Miriam and Aaron spoke against Moses” (Bamidbar 12, 1), and it is serious enough that God, acting almost as a parental figure, responds. Only, the manner in which God chooses to respond is puzzling — unfair. “As the cloud withdrew from the Tent, behold Miriam was stricken with tzarat like snow” (Bamidbar 12, 10).

And I hate this. I really, really do. Both Miriam and Aaron speak lashon ha-rah against Moses, so why is only Miriam punished? If I were still a Freshman in college, I could chalk it up to simple sexism, relating it to the context of the time and historical basis. I could do that, I did do it, and it was fun. But that feels unsatisfying to me. I feel like I’ve moved beyond that point in my relationship with the text, and I think we all are at a more sophisticated level understanding.

Sifrei Bamidbar acknowledges the injustice done to Miriam, and claims that she was stricken because she was the instigator of the lashon ha-rah — that she spoke first, and encouraged Aaron do so. There is some basis for the text — after all, tdaber is in the singular. But I don’t like this explanation either.

I would like to propose a different interpretation, based on one word. The text tells us that “Aaron looked at Miriam” (Bamidbar 12,11). Why does it tell us that vayifen, he looked? Surely it’s obvious that he would look and see what had happened to his sister? I believe that for Aaron, the one who stands beside, who helps and supports Moses throughout the time we see him and undoubtedly does the same for Miriam, the worst possible punishment would be to see his sister stricken and in pain, and be unable to do anything. Not only is he unable to do anything, not only is he unable to share her suffering, but as the cohen he will be obligated to send her out of the camp! Just as Miriam is punished for her lashon ha-rah by its affects on her own self, Aaron is punished by watching the consequences of his words fall on those that he loves.

What do we take from this? That sometimes the consequences of our actions fall not on us, but on those we care for. This is true for both the good, and the bad. So my blessing for us all — and definitely for me too — is that we should live such lives that the only consequences that we see fall on those we love should be the good ones, the joyous ones, the ones that are a blessing for them, and through them to us.