I just want this to be Perfect

Posted on September 9, 2013 by Avi Benson-Goldberg 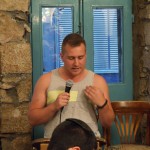 This summer, I tried to teach Judaics to 15 year olds for 8 weeks. It was probably a failed mission from the beginning, because the last thing any 15 year old wants to do is spend an hour inside with a 24 year old authority figure, even as patently cool and with-it one such as I. When you’re newly come into your body, and your localized power (these kids were the creme-de-la-creme), you don’t want to go to class.

And I really wanted them to like me. I really craved 15 year-old approval. I was pretty cool as a 15 year old, and I felt how not cool I have become by my standards as a high schooler, and I wanted to get back my groove.

My teacher mentor, this summer, after talking this through with me, mentioned he’d heard me talking about my love of Macklemore.

Isn’t he sort of like a prophet? Isn’t he incredibly popular with your students?
I mean, I guess they would die if they knew I knew him, and listened to him.

So I taught them about the terrifying power of the prophetic voice and urge, using Macklemore. Up top, you’ll see Macklemore’s “Same Love.” It’s a beautiful song. It’s a song calling for us to be our best selves, in an arena where most of us aren’t immediately harmed, by pointing out the lasting and insidious harm of denying others a fundamental right. (Not to mention I like it a lot because I remember being in youthspeaks206 around Mary Lambert, and as a gay man, it’s nice hearing something like this on the radio.)

And my students followed me with this. Because they knew what the song wanted to say, and how it felt, and what it meant, from the beginning. It wasn’t written in riddles in a language they don’t speak.

So we walked a little further down the path:

Otherside is a song about the damages of drugs and alcohol—more importantly, about the dangers inherent in rappers and musicians propping up substance abuse as a part of “authenticity.” It’s ok, Macklemore wants us to know, not to use. It’s ok, in fact, to say no. To get better—to give up on some for of potential crazy and find another way.

This song has quite rightly helped many a person find their way to rehab, or any other personal change. It’s an anthem for honesty, for finding new solutions, for health.

And between the release of the V.S. EP (2009) and The Heist LP (2012), Mack relapsed (so the lyrics indicate). Found himself back at square one. More most importantly, he found himself doubting the truth of what he had previously claimed.

The prophets, I am sure of it, doubted. Jonah, famously, doubted his power, and his words, that he refused to speak. We’ve never heard a word from his lips. Isaiah wailed that he wasn’t worthy, that he too was a sinner with filthy lips. Ezekiel knew himself only to be a “son of man.” But we never got to chance to hear them worry. Isaiah doesn’t record a moment of doubt in the midst of his prophecies. Isaiah is sure, every word he calls out to the people around him one he is confident to be correct.

That’s the way with canon, and theology. We keep the parts that prove how extra-human those closest to the Divine are. Who wants to spend time believing in a theology of uncertainty? Who wants to hear from the lips of a man who worries what the consequences of his prophecy will be? What does it do for us?

“Starting Over” lets us answer that question. Mack’s doubts, his self-recrimination, his faltering attempts to reestablish equilibrium within himself within himself: this is the after-effect of the prophetic voice. This is what happens, when you wake up to hearing those other words, springing off your lips, not quite sure where they came from. Did you say that? Is is right to tell everyone that?

This is what happens: we try incredibly hard to teach a good lesson. We just want it to be a perfect. And when it is perfect, we lament that we weren’t perfect enough to have created that. And when it is not perfect, we weep over how horrendously off mark it was. And yet that lesson will still be learned. And all we can do is try to correct ourselves for our failures.

In the end, my kids liked my class. They really liked Macklemore. And they liked that I’d stopped trying to be “Mr. Teacher” and started being “Benson-Goldberg” and helped them see a thing.