[Student Profile] Nataliya Naydorf knows everything about how you use your computer.

Posted on December 17, 2013 by Avi Benson-Goldberg

Nataliya Naydorf read from the Torah last week for the first time. Then there was a terrible snowstorm. She assures me the two are not related. 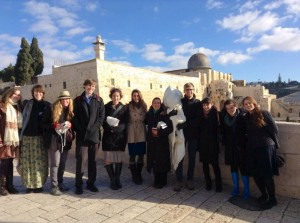 She’s used to the snow, of course, because Nataliya hails from the former Soviet Union (FSU). Her country of origin literally doesn’t exist anymore. I roll this thought around a lot as I get to know her, and as I try to write this profile. I wanted to say homeland, but Nataliya’s pretty adamant that Soviet-era Ukraine (hell, even contemporary Ukraine) isn’t her homeland, it’s simply the place her family comes from. The thing about Ukraine, about Russia and her surroundings, is simply that either you’re in or your out. As a Jewish family, the Naydorfs were out. They’re not trying to change that now.

It takes us a while to finally sit down together and have lunch. The first time we have to cancel, Nataliya tells me that she’d made borsht. She’d prepared to be “extra-Russian.” Luckily for us, I caught her at a different lunch, less ready to tell us only that story. 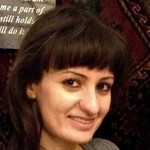 Born in Kiev, Ukraine, in the twilight of the USSR, Nataliya emigrated to Rockville, Maryland at the age of six. Six months later her passport pointed to a country that no longer existed. I think this is extraordinary, and incredibly unmooring. Nataliya thinks I’m being too romantic. Perhaps against the backdrop of the Soviet “lost generations” of Jewish culture losing another droplet or two of a cultural identity simply doesn’t register.

“My mom worked for Chabad when we first got to America, because even though she had a masters in Computer Science, she didn’t have good English.”

She didn’t grow up with any sense of Judaism in her early life, and it wasn’t until she was 8 and she was sent to Camp Gan Israel, a Chabad camp, that she gained any. It wasn’t an easy introduction: one of two non-Orthodox children at camp made the whole experience just another layer of dissonance.

“I think my mother wanted me to have a sense of Judaism and being Jewish.”

When the Naydorfs had left Kiev, the first Jewish school had opened, so Nataliya’s older sister had gone. Between that educational experience and facing anti-Semitism (Nataliya’s sister is 6 years older than she), she had begun to build a sense of her Judaism. But not Nataliya.

Growing up, in Kiev, there was no synagogue, but there were sort of secret Jewish aspects. Once a year, there was a synagogue that would bake matzoh and they would wait in line from 3 in the morning — it was incredibly rare, and if you weren’t there, you wouldn’t get. And they would have feasts at random according to her Grandmother’s demands. There was no explanation for why they were eating those dinners, just suddenly they would be having dinner, like a big feast! No reason given. But later she found out that this was Rosh Hashana, or this was Yom Kippur. There were traditions, but they had been definitively lost.

I grew up really without a sense of being Jewish, I didn’t really have those thoughts — I didn’t have the trouble of identity. Moving to the States was harder: I had no common language. Children are little sponges, they absorb everything around them. 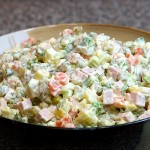 I adapted as quickly as I could — but my parents packed me weird foods. My English as a Second Language friends and I didn’t like it, so we’d sit around saying ‘What do americans eat?’ in our broken English. I still wondered up until I realized–oh, Americans like casseroles. Nothing’s boiled! We boil everything in Russia. Add mayo. Call it a salad.

That she didn’t grow up with Judaism is repeated multiple times throughout our conversation. Her first experience was through the Chabad lens — which was, in her words, “a pretty f-ed up lens to encounter Judaism with. It was very intense, and to a certain extent there was some brainwashing.” She’d learn something, come home, tell her parents, and they’d tell her “‘that’s bullshit’ because they were Soviet.”

There’s a dualism and contrast between being a secular, non-religious Soviet, and reconciling with the Jewish aspect, and that’s something Nataliya’s been struggling with for a very long time. She went to Hebrew school, and because she couldn’t write or read Hebrew, she was put a grade back.

“When you’re 12 or 13 years old that’s lame, and you feel stupid. I did learn how to read and write block letters, and I learned a lot of the prayers and the stories, and I got my first siddur.” 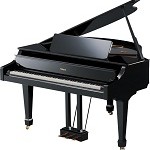 And then her parents offered piano lessons — it was much more comfortable because her dad could drive me, and she lost interest in Judaism, about the age of 12 or 13.

“I was terrible at piano and I have no musical talent whatsoever, but I still remember what I learned in hebrew school.”

She became super goth in high school, and dabbled in Wicca, “and then I said who am I kidding I believe in only one god.”

This bowled me over with a spoon, to hear Nataliya say this. It’s a pretty great comedown on neo-pagan beliefs, first of all, and secondly, it’s amazing to hear coming from a high-schooler, even in memory, say. Because Nataliya is funny, and she’s blunt, she tells us the truth.

“I felt uncomfortable with the Wiccan goddess — I didn’t know how to read it, it was weird to me, I never felt a sense of comfort. And of course now at Pardes, I learn about the Shechina!

And then that ended, and I had to get rid of all my black clothes. Basically it just ruined my fashion sense for a while. I didn’t know how match colors. I grew so much!” 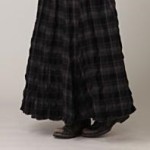 Nataliya’s fashion choices changed again, as she became more traditionally observant in university, culminating in wearing long skirts, and dressing modestly, praying — her parents were supportive, even as she kept kosher, though it was disconcerting for them. After she left their house, however, she came to realize that she didn’t feel she was living honestly in her Judaism, so she scaled it all back, again:

“I really regretted giving away my short skirts and cute dresses. So much cute stuff I gave away in my religious fervor — this new wardrobe trend. I believe that your external changes with your internal, and vice versa: I dressed how I felt. And now I dress how I want to and how I feel good about.”

There’s so much to say — Nataliya and I spoke for a long time, about a lot of things. Ultimately, we kept circling back, though, to the degradation of Jewish tradition during the Soviet moment, which she sums up as such:

“Russians are very into tradition, especially Soviet Jews. Like Mizrachim. We’re very all or nothing.”

Nataliya, though, is trying to change that in herself: she’s here at Pardes to create a developed and integrated Jewish self. And if you sit and talk with her long enough, she might even bring you along with her. Or feed you — after all, “Soviets — you can live with us forever. I’m going to make you food every day.”