A few weeks ago, an actress came to Pardes to do a kind of skit, stereotyping Four Faces of Israel, or four different people that one will inevitably encounter in Israel. She portrayed the narratives of a Haredi woman, a settler, a kibbutznik and an Arab woman. Somehow, every experience that I have, everyone that I encounter, draws my mind back to that day. The more I think about it, the more I realize that there is so much more to the melting pot that is Israel because of all of the people that don’t fit into the portrayal. I’m on the Social Justice Track at Pardes, a class designed to teach a wide range of text relating to various social justice topics and show students what’s actually going on in Israel. For the first part, we sit in the beit midrash, the house of study, discussing with our hevruta, study partner. For the second part, we take field trips, talk to tour guides, but more importantly, talk to individuals.

While the people that we have met have been vastly different, one thing echoes from their collective stories — that they’re happy to tell us their story and wish that we tell it to others. I’ve alluded to these individuals in some of my other blogs, but I wanted to dedicate a series to the stories of these people, with whom I’ve crossed paths. Editor’s Note: While the series began with the Social Justice Track, it is transitioning beyond the confines of the experiences of 1 semester, and into my entire year in Israel. 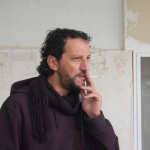 The fourth face is that of Ali Abu Awad. Ali grew up, in what he called, “a place that wasn’t a place where you grow up with peace.” His mother was very active in the Palestinian Liberation Organization (PLO) and was in Israeli prison for 5 years. Growing up in this environment educated him to be angry and to hate and, as a child, Ali felt as though he wasn’t allowed to dream for a better future. When the First Intifada started, Ali was 15 years old and it only took him one minute to engage with all of the anger that had been bottled inside of him for his entire childhood. When the Intifada began, he finally had an outlet for all of the hatred that he had been educated to have. 1990 was the first time that Ali was arrested, and quickly released. Shortly after, he was arrested again on charges that he didn’t specify.

The second time that Ali was arrested, he was in prison for four years. He informed us that Palestinian Political Prisoners have a very organized system. In the prison, there are five different committees that practice a different form of indoctrination against hate and violence. “It was the best University that you could imagine,” Ali said of his prison education on Martin Luther King, Jr., Ghandi, peace and non-violence. During those four years, Ali participated in a 17 day hunger strike against violent activism. “Non-violence is the best engagement between your humanity and your cause.”

When Ali was released, he became a citizen of a country instead of the revolution that he entered prison a citizen of. He began working as a Security guard where he was charged with the task of arresting Palestinians who were fighting against Israel. This was an extremely confusing time for his identity. He grappled with the questions of belonging and allegiance. The people that he came into contact with tried to convince him that Israel wasn’t just his neighbor, but instead the force that was controlling him. He was confused and desperate. And then the Second Intifada began.

This time around, his family adopted a vastly different perspective. According to Ali, his family didn’t involve themselves in the violence of the Second Intifada because they realized that militant activity wasn’t effective. Although, Ali wasn’t sure that he could continue to work on behalf of Israel and resigned from his Authority position. He described the Second Intifada as a “revenge against the failure of Oslo, a revenge of occupation, and anger at Arafat.” It didn’t seem fair that the agreement included unequal concessions. “The Palestinian people were supposed to recognize Israel’s right to exist and Israel only had to recognize that the PLO was a governing body? That’s not equal.”

As I mentioned in another blog post, Ali then began to tell us a story. One day, he was driving and a settler shot him near Hebron. He then went to Saudi Arabia to receive treatment. When he got out of surgery, he got a phone call that his 31 year old brother, Yusef, had died. “Yusef worked for Keren Kayemet L’Yisrael. He had a huge heart. He worked with Israelis every day. He had Israeli friends. I knew what it meant to lose land or lose rights, but this was different,” Ali expressed with a sigh, “I lost the taste of life.”

He went on to explain what it means to have a vigor for life, to be excited to wake up in the morning, to be eager to greet the day, to enjoy the taste of food, to smell the flowers. All of that was gone for Ali.

One year later, Ali got a phone call from a group of bereaved Israeli families and they decided to get together for a meeting. For Ali, it was the first time that he saw an Israeli cry. It was the first time that an Israeli asked for permission to enter Ali’s house. It was through this meeting that Ali conceptualized the victimization that the Jewish people have faced. At the same time, he recognized that Jews are victims who are victimizing others and themselves. Israel is victimizing Israel by forcing them to enter the army and become criminals or victims. Even if you don’t factor in Palestinians, Ali theorized, this is harming Israel’s morals.

From there, Ali went on to start an organization in his community called “Leading Leaders for Peace” in an attempt to show Israel that they have a partner in peace. Exhausted by the droves of people coming to 5-Star peace conferences that can pay for food for his entire village, Ali felt that he needed to do something else.

“I understand the need for Jews to have a state. I know that Judaism is a nationality and not a Religion. And that they were persecuted for being Jews. The questions I am left with are, how do Israelis serve the state and how can they [Israelis] have that [history of persecution] and recognize Palestinians also?”

How did Ali reconcile all of these perspectives within himself? How did Ali acknowledge his past perspectives and use them to move forward? In Ali’s opinion, Israel has a huge chance, today, to sign a peace agreement and the Palestinian Authority is the best and last chance. How do you fight extremists? By encouraging the good ones. Extremists don’t recognize anyone, Palestinian or Israeli. They recognize themselves. In 1993, as a people, the Palestinians accepted the recognition of Israel as a State. “Almost immediately, we were ashamed because the consequence was more settlements, more fighting and occupation.”

Violence isn’t seen as a crime, like it should be. It’s seen as a valid approach to freedom and that’s a stumbling block in the way of peace. Ali feels that a 2 State Solution is the best possible answer which says that we need to be separate but that Palestine can’t exist without Israel. We can live without Jordan, but we can’t live without Israel. Israel is strong and powerful and makes our lives better. Israel needs to recognize how strong it is and stop functioning on fear.

Ali ended by stating something that I’m not sure I’ve ever heard directly from the mouth of a Palestinian. He said, “Israel is giving the world a gift by continuing to occupy the Palestinian people. Israel needs to trust Palestinians to stand up for themselves and stop negotiating with nations that don’t care about Palestinians. Those nations use Palestinians as their reasoning and don’t care about us. Dialogue is nothing. People need practical peace.”