[Alumni Guest Post] Why Were the Jews Given the Torah? 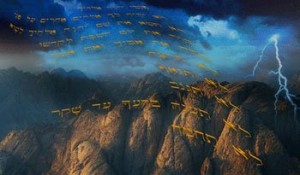 There are many stories and versions of why the Jews were the ones to receive the Torah. But what are the differences and what can we learn from each of them.

(3) And Moses went up unto God, and the LORD called to him out of the mountain, saying: ‘This you should say to the house of Jacob, and tell the children of Israel: (4) You have seen what I did unto the Egyptians, and how I bore you on eagles’wings, and brought you unto Myself. (5) Now therefore, if you will listen to My voice indeed, and keep My covenant, then you shall be My own treasure from among all peoples; for all the earth is Mine; (6) and you shall be unto Me a kingdom of priests, and a holy nation. These are the words which you will speak unto the children of Israel.’ (7) And Moses came and called for the elders of the people, and set before them all these words which the LORD commanded him. (8) And all the people answered together, and said: ‘All that the LORD has spoken we will do.’ And Moses reported the words of the people unto the LORD.

In these verses we don’t see a very specific reason as to why we are the ones who receive the Torah. According to these verses, the Jews are the ones that received the Torah is because God loved them and brought them out of Egypt.

In Devarim 7:6-11 we read something similar, but with the added idea that we were able to leave Egypt because of the merit of our forefathers.

(6) For you are a holy people unto the LORD your God: the LORD your God has chosen you to be His own treasure, out of all peoples that are upon the face of the earth. (7) The LORD did not set His love upon you, nor choose you, because you were more in number than any people—for you were the fewest of all peoples— (8) but because the LORD loved you, and because He would keep the oath which He swore unto your fathers, the LORD brought you out with a mighty hand, and redeemed you out of the house of bondage, from the hand of Pharaoh king of Egypt.

There is a Midrash that comes to teach us that we also were able to get the Torah because of the merit of our forefathers, specifically Abraham.

At that time [when Moshe went up the mountain] the angels asked if they would be allowed to injure Moshe. God made Moshe’s face look like Abraham, and God said to the angels are you embarrassed, here is he that you went down to and you ate at his house. God then said to Moshe, I only have given you the Torah from the merit of Abraham…(Shmot Rabbah Parshat Yitro 25)

From here it seems that we were only worthy of receiving the Torah because of Abraham, otherwise we would not be able to get it at all.

There is another famous Midrash (Sefri on Devarim, Parshat V’Zot HaBracha 343) as to why the Jews were the one’s to receive the Torah. In this Midrash we read about God going from nation to nation to offer the Torah, and each nation says that they will be unable to accept the Torah because of certain laws that are written in it. This happens until God gets to the Jews, who then answer “we will do and we will listen”.

The Gemara in Shabbat (88a) records a fascinating conversation between Moshe and the angels. The angels are not happy that there is a human up in the heavens, nor are they happy that God is giving away the Torah to mortals. God then encourages Moshe to argue and defend the Jews as to why they should receive the Torah. Moshe does so, by going through the Ten Commandments and proving that the angels do not need the Torah nor is the Torah applicable to them. In the end, the angels agree that the Torah should go to the people, because the Torah is created for humans and not for angels.

The Gemara in Beitza (25b) asks explicitly, why were the Jews given the Torah.

A Tanna taught in the name of R. Meir: Why was the Torah given to Israel? Because they are headstrong. The School of R. Ishmael taught: ‘At His right hand was a fiery law unto them’; the Holy One, blessed be He, said: These are worthy to be given the fiery law. Some say: The laws of these are like fire, for had not the Law been given to Israel no nation or tongue could withstand them.

Here we learn that the Jewish people are a bit headstrong, and the Torah has the ability to calm that down a bit, which helps them be able to interact in the world around them.

So why do we have so many stories of why we were given the Torah? I think that it is to teach us different aspects of the Torah and how we need to interact with it. The Torah was given to us because God wanted to give it to us, and that is our connection with God and His connection to us as the Jewish people. But at the same time, the Torah was received because of our forefathers. That part of the Torah is our history and our roots. The Torah is also something that we accepted, even though no other nation wanted to do so (for whatever reason). And the Torah is something that is made for humans. It is not a book that was created for the angels, it is a book that was written by God for people on earth to learn from and to to follow. And finally a reminder that the Torah is fire, and that we too can be like a fire. We can use fire in different ways- in one way, it can keep people warm and comfortable (think bonfire) but on the other hand, it can be something that burns and destroys. We need to try and remember that both as a people but also how we use the Torah, that we should be trying to use Torah to bring people together rather than burning the people around us.