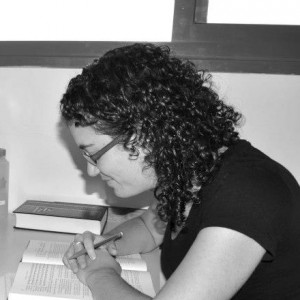 I feel connected to you even though I never knew you. The moment that you were killed was a powerful moment in my own personal narrative relating to Israel. I was scheduled to come to Israel for a semester of high school in the fall of 2002. All summer, I was worried about the situation in Israel. It wasn’t clear if the program I was going on was still going to run and people I knew were dropping out because they didn’t feel safe. After the bombing at Hebrew U, the program was officially cancelled. I was disappointed, but mostly very concerned for the sake of the State of Israel and all of the people living there. Luckily, it only postponed my journey to Israel by a semester and I was able to come on the spring term instead.

Last year I came to Pardes after working for three years at Hillel. I came for a lot of reasons, but the main one was that I wanted to invest in my own Jewish development. My long-term desire to work in Jewish communities was not a driving factor. I simply desired to learn Jewish texts. I had never done this before, I was exceptionally nervous and had no idea what to expect. I fell in love with Pardes gradually. It was difficult for me to learn full-time, it was hard for me to be put in a situation where I was confronted with my own ignorance. But, my desire to be challenged and deep quest for knowledge pushed me through the first few months. By second semester, I was in love with learning and with the way in which Pardes adds value to the Jewish world. I still can’t identify why it happened or how I got to this point, but when I tell my friends how much I love Pardes, none of them are surprised.

I can’t remember exactly when I first learned about both of you. I know that over the course of my first few months at Pardes I saw your pictures on the wall and saw dedication cards with your names on them in the front of a lot of the books in the Beit Midrash. Somewhere in my consciousness, I had a sense of who you were and your lasting impact on Pardes. I somehow knew a bit about your story, without ever having heard it from anyone firsthand.

I remember the day that I learned more about you very clearly. It was in March of last year. I hadn’t yet decided to stay at Pardes for my second year, but I was close to making my final decision. It was the Yom Iyyun Shel Chessed that was established by Pardes students in your honor. We learned about cheesed in our morning classes. At lunchtime, the whole community gathered in the chadar ochel to eat lunch and to hear a presentation about your stories.

David Bernstein introduced the community to both of you. Ben, Rahel spoke about you. She told us about your abounding enthusiasm, that you were a lover of music and that you constantly drummed on the tables. She mentioned that you were a little bit of a wild personality, and that your energy was infectious. She told us that you spent hours helping her organize the source book for her Women and Mitzvot class, the same one that she still uses.

Marla, David spoke about you. He told us that your smile lit up every room that you walked into, that you were very dedicated to Pardes, and that you were always willing to give a little extra. He told us that he once asked you to write something about your relationship to Israel so that he could send it out to some friends of Pardes and then read us what you wrote. As he did so, I knew that if we knew each other, we would have gotten along. Or, at the very least, I would have looked up to you. Just a few days earlier, my roommate and I had a conversation about the way in which we related to Israel. When I heard what you wrote, it was as if we stole the words from your mouth.

The more I learned about both of you, the more your story resonated with me. I saw myself in your shoes. As lovers of Torah, of Israel, and of the Jewish people as a whole. For the rest of the semester, I thought of you often and always paused for longer when I saw the dedication cards in the books in the Beit Midrash.

I decided to stay at Pardes for another year, and I am thrilled to be back as a Fellow. My learning has excelled. I am no longer worried about what I don’t know and am able to do many more things on my own. I feel empowered Jewishly and, am constantly thankful that despite the headaches of reapplying to graduate school, I get to walk into a place that I love every day.

A couple of weeks ago, I was called into a meeting in David Bernstein’s office. I sat in there with another staff member who works on fundraising at Pardes. She told me that every year two students are chosen to receive a scholarship in your names. That these two students are chosen because of their contribution to the Pardes community and that I was one of them this year.

I was so honored. I know I give a lot to Pardes, but this seemed like too much recognition for me. Not ever having the opportunity to know either of you, I looked up to you, and here I was receiving an honor in your name. It was an unexpected connection; I was emotional about it for the rest of the day.

As I thought more about it, I sought to understand why this honor is so meaningful for me. I spoke about it with a few people to try to process what I was feeling. I realized that ever since hearing about you, or even before knowing anything about either of you, you were part of my personal narrative relating to Israel. Like I said at the beginning of this letter, I feel like I know you. And, as I heard more about who you were, I wanted to find some small way of healing the tragedy that struck the world the day you were killed. I will never be able to heal all of the pain felt by your loved ones, or your community, or the students who you were never able to teach. But, the minute I learned about you, I wanted in some minuscule way to try to help.

Now, with this scholarship, I have the ability to do so in a direct way. I want you to know that I take this responsibility very seriously and that it will have an impact on the way that I walk around Pardes. I will continue doing all of the things that I typically do for this community, but now I will do it with your spirit in mind. I will learn in your memory.

I hope to learn more about each of you so that I can continue to honor your memory in meaningful ways.