Kyle was raised in Berkeley, CA to a father who had rejected his Jesuit upbringing and faith altogether, but remained knowledgeable through his work as a publisher of religious books, and a Jewish mother who did not have a strong traditional upbringing.  While Judaism as such did not play a positive, central role in her early life, God and spirituality certainly did. 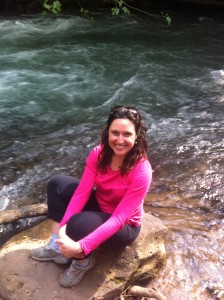 Her mother taught her the Shma as a blessing to allay her fears, and she still instinctively recites it when appropriate.

Attending bi-weekly Hebrew school a half-hour drive away from home during her primary school years, Kyle felt that: “Judaism was a building I attended Hebrew school in.”  Nevertheless, her mother did not abandon the hope that Judaism would play a central part in Kyle’s life, and her efforts paid off.

While attending a private high school — education was and continues to be one of the highest values in the household — Kyle participated in the New Jewish Film Project, bringing together Jewish high school students from the Bay Area to create a film to be shown at the San Francisco Jewish Film Festival in the summer of 2002.  They created a documentary, Not Another Jewish Movie, about what it was like growing up Jewish in the Bay Area, and it was screened widely.

Moving away from home to attend Mount Holyoke College in Massachusetts shortly after her parents got divorced was very hard for Kyle, and Judaism was one of the most familiar parts of her life as she acclimated to being so far away from home.  Beginning with walking by a קבלת שבת service and being inspired to make that a part of her life (a la Rosenswieg), and leading to being the president of the Jewish Student Union the following year.

The summer after her first year at Mount Holyoke, Kyle worked at Camp Tawonga (located just outside Yosemite National Park), a Reform summer camp with a heavy focus on nature.  There Kyle lived Jewishly 24/7 for the first time, and it became a central part of her life, three months of sustained Jewish living over the course of the following six years.

Kyle transferred to St. John’s College in Santa Fe, New Mexico after two years at Mount Holyoke, and greatly enjoyed the liberal arts focus there — or, in Pardes language, the focus on learning lishma.  Having the ability to simply learn what interested her, and not be focused on a career, was very rewarding, and supported by Kyle’s family.

After graduation Kyle spent a year living in New York, which, with all its promise of being a place where Judaism could be more central, was a tough year due to an unease about what to do next and the high cost of living.  She then spent a summer learning Hebrew at Middlebury College, followed by a year at home teaching in the Reform congregation’s Hebrew school.  During that year (last year) it became clear to Kyle that she wanted to explore Judaism as rigorously as she had her liberal arts education, and so she decided to dedicate the next year of her life to studying at Pardes, with thoughts of entering the rabbinate already percolating.

“Pardes has been an incredible blend and a tremendous affirmation of everything I had learnt before, bringing together my love of learning with my love of Jewish community, and my wish to work as some sort of spiritual guide.”

Kyle’s favourite part of Pardes has been chevruta learning, and her least favourite has been feeling less than an authentic Jew in the Pardes community when a high level of ritual background is assumed, and the focus on halakhic Judaism is trumpeted above all other forms of Judaism.  While the learning has been tremendous overall, Kyle says that: “A lot of days here I do not feel like a real Jew.” Compared to the local culture, Kyle feels she stands apart as an academic, spiritual, folksie, West Coast woman, and as a beginner in traditional Judaism.