Tamar views her Jewish journey as a work in progress, or, as Zvi Hirschfield suggests, that of a Gemara sugiyah.  As a child growing up in Los Angeles, she went to Hebrew school three days a week and was ‘that kid’ who loved it.  Perhaps Jewish education’s emphasis on modern Hebrew at the time made the difference.  Nevertheless, her Jewish identity flourished and, all the more so, when she first went to Israel during the summer after 10th grade on the ‘L.A. Ulpan.’  She returned a typical American Zionist teen, complete with Tzahal cap and more colorful language.

Throughout high school, she continued post-Bat Mitzvah studies, was involved in Jewish teen leadership programs run through the local Federation, and coordinated the “Jewish Awareness Club” at her public high school.  In 12th grade, she traveled again to Israel where she lived with families and spoke in Israeli schools about life in the U.S.  Her study of Hebrew coupled with her willingness to use it helped a lot during that and subsequent trips to Israel.

At U.C. Berkeley, she continued studying Hebrew and participating in Jewish and Zionist activities, which included co-leading the Progressive Zionist Caucus with her friend.  Junior year came and Tamar headed off to Haifa University to study.  After finishing the summer Ulpan, she jumped on a boat for a quick Greek island vacation before starting classes.  Unfortunately, she ‘fell off a cliff in Greece,’ and spent her Junior Year Abroad in Los Angeles recovering.  That moment was a game changer for her.  She gave up her dreams of making aliyah, and focused on ‘being reasonable.’  A few years later, she was going to law school at NYU.

While she never got a white picket fence, she did get a puppy dog, a job as a litigation associate (‘LA Law’ for those who remember), and a lovely husband.  After a few of life’s twists and turns, which included some more education in Oregon and a stint as an environmental attorney in Washington DC, she found herself in Santa Rosa, California, an hour north of San Francisco, with her husband and first daughter.  To keep herself busy and yet still have time for her young family, she taught Hebrew at the local synagogues,  which led her to become the director/head teacher of a small religious school in Petaluma.   A major draw to this position was that she had a strong and positive influence on her daughters’ Jewish educational experiences. 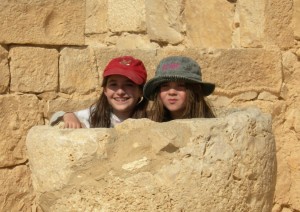 Still, Tamar wanted her daughters to have stronger ties to Israel and the Hebrew language; and her family spent the summer of 2007 together in Israel.  Their older daughter attend the Ein Yael camp, while Tamar studied in the Pardes Summer Track for Educators.  Then, more recently, circumstances arose that provided Tamar, who was both practicing law and running the religious school, a unique opportunity to live in Israel.  Three months later, she was on a plane with her daughters in tow, enrolled in the ’11-’12 Pardes Year Program, and heading for adventure.

“It has been a phenomenal year, though there have definitely been difficulties, especially in those first few months before my husband could join us.  I have learned so much at Pardes; my teachers have been great.  My daughters seem to have survived Hebrew immersion through the Israeli school system, but it wasn’t pretty; sort of like shock therapy.  In the end, Pardes was not only a positive experience for me, but for my daughters as well.  For most of the year, if you asked them what is the best part of being in Israel, their answer was ‘Pardes’.  I am extremely grateful to the Pardes students who have so generously embraced them and shown them that it is cool and fun to be Jewish and to study ‘Torah’, however either word is defined.  What more could a Jewish parent want?”

As for the future, Tamar finds herself again at the cross-roads between law and Jewish study, but now she does not see it so much as a choice of one or the other but more of a dance that she is committed to learning for the rest of her life.