As some of you may know, Th&Th loves Pardes alumni blogs! And when we find them, we like linking to them from the side menu of our blog… and sometimes we even get nosy enough to interview our alumni, and spotlight them here in a Th&Th blog post.

So it turns out that the soferet Jen Taylor Friedman is a Pardes alum… And better yet, she has a blog, which she writes in quite regularly! So… we decided to bother her, and ask her a few questions; check out the interview below:

Th&Th: Jen, when did you study at Pardes? 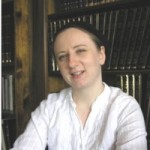 JTF: I studied at Pardes from ’03-’05; first in the Year Program, and then as a Fellow during my second year. By investing in me as a Fellow, Pardes gave me a “pay it forward” attitude to learning and teaching; Fellows learn but they also teach on whatever level they can, and they’re given stipends to enable that. This meant I taught a lot of other people what I knew and often as not I did it for free, which had a net positive effect on the community, I think.

Th&Th: Could you tell us a bit about your own studies at Pardes?

JTF: Well, Pardes let me have a balance between structured and independent learning, so I became able to learn Torah independently, which is really valuable to anyone with non-mainstream interests (i.e. most people). During my independent learning time, I studied the laws of sofrut – as my learning skills improved courtesy of Pardes, I was able to make better progress with this – and eventually I felt ready to attempt my first Megillah.

Th&Th: Why did you decide to start first with a Megillah?

JTF: The Megillah is actually a traditional starting point for new scribes. It’s not too long, and it doesn’t contain any of the Names of God. Thus, it’s pretty hard to make any really terrible mistakes, and the baby scribe can get through the project in a manageable sort of time.

You can study theory all you want, but if you can’t get hold of materials, and you wouldn’t know how to use them if you did, you’re a bit stuck. Fortunately for me, since there are opinions which say a woman may write Esther, a sofer who teaches at Pardes was willing to help me write it. He would get materials for me, and show me how to use them. That was a courageous thing for him to do, because in giving me those skills he would be helping me along the road to writing sifrei Torah, tefillin and mezuzot, which is something he could not condone. Many people would say that he should not give me a tool to do something permitted if there were to be a chance of my using it for something forbidden. He gave me the tool and let me choose what to do with it, and I thank him for that.

Th&Th: So… you actually wrote your first Megillah here at Pardes?

JTF: Yep. That year, there was an earthquake in Israel. I was in Pardes’ beit midrash that morning, writing away, but I stopped writing when the building rocked and the room started wobbling up and down. For a second we thought it was a bomb, but bombs don’t make the floor ripple. Pardes has a very diverse community; you could tell the Californians, because they dived underneath their desks. The rest of us sat there gaping until the room came to a standstill. People came over to me, asking “How’s the Megillah?” It was fine.

I finished the writing, and took it to the sofer. He looked at it. I waited. “It’s a very good first Megillah,” he said. At several years’ distance, I see just what he meant. Still, it was nice enough, I was proud of it, he was satisfied. I think I was his first female student to complete a Megillah.

JTF: I wanted to! So I took it to Rabbi Landes, the Rosh Yeshiva. I asked him: can we read from a Megillah I’ve written? He looked at me from behind his beard. Had I already written it, he asked. Yes? He would need some time to think about this. Give him a few days. He had to decide whether it was okay, in principle and in particular.

As you know, Pardes does things by the book. It’s not an Orthodox institution, but it’s an institution Orthodox people can be part of. That means when it does something, it does it properly. R’ Landes riffled through some enormous tomes and decided that in principle, he was okay with reading from my Megillah, but – but – if I hadn’t written it properly, Pardes’ reading would be completely invalid. So he talked to my sofer. Was this a kosher Megillah? I wasn’t in on that conversation, but the answer must have been yes, because R’ Landes hunted me down and said the Pardes reading for that year would be from my Megillah.

Th&Th: … You must have been so excited!

JTF: I was over the moon. My work had been weighed in the balance and found worthy. It could be used to fulfil the mitzvah of Megillah reading for the yeshiva.

A decision like that isn’t taken lightly. The Megillah reading fulfils the obligation of an awful lot of people; someone co-ordinating a reading has a responsibility to the whole congregation to make the reading kosher. Approving my Megillah meant that serious people with heavy responsibilities were satisfied with my grasp of the scribal arts to the extent that they would trust the reading – the fulfilment of everyone’s obligation – to my scroll.

That was when I felt I’d graduated. For sure I still had a long way to go – still do – but I was over the bar of being minimally competent.

So I kept studying!

Th&Th: Jen, thanks so much for sharing your story… could you give us a sense of how many Megillot you’ve written since then?