Maybe it’s because I grew up feeling like one, or maybe it’s just some genetic Jewish thing, but for whatever reason, I’ve always sympathized with the outsider. When I went on the Tale of Three Cities tiyyul the two weeks ago, I didn’t know what to expect, except that we were going to meet three very different women—one Muslim, one Haredi, one a secular kibbutznik—on their home turfs, less than a mile away from each other in the foothills leading up to Jerusalem.

I don’t think you can understand something unless you understand its “opposite.” I put “opposite” in quotes here because the more “opposites” you encounter, the more you come to realize that opposites are defined more by their similarities than their differences: The opposite of “down” is “up” and not “lip balm” because “up” and “down” are essentially the same thing just going in different directions, and sometimes this difference is only a matter of subjective perspective, while others, such as when you’re drowning, you can’t even tell which is which. Put differently, in moments of crisis, sometimes subjective categories cease to exist altogether and along with them the whole concept of “opposites.” 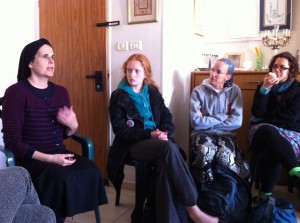 Visiting a Hareidi woman at her home
in Telz Stone

Having defined my terms, I can now say that for me the biggest surprise of the tiyyul was seeing that the Haredi woman and the kibbutznik were total opposites. We met the Haredi woman first (second overall, but I’m saving the Muslim woman for later). She invited us into her apartment, fed us biscotti, told a little about herself, then answered our questions. Like many Haredim I know, she grew up Reform. She attended college at UC Berkeley, came to Pardes to explore her roots, decided to put her law degree on hold to stay in Israel for a little while longer, and the rest is history. She is now a rebbetzin, aerobics instructor, and mother of nine in the highly insular Telz-Stone community. Her wealthy in-laws bought their apartment for them, her children do and will not serve in the Army or eat at certain neighbors’ houses, they keep their computer locked away in the rabbi’s office, and TV’s are prohibited in Telz-Stone, not that they would have one anyway. The general idea is to keep the children as far away from the outside world as possible, lest they become as damaged by it as she was.

A short bus ride later, we were speaking to a resident of Kibbutz Ma’ale Hamisha. She grew up on Long Island, married a native of the kibbutz, and has lived there over 30 years, first as an English teacher, then in her dream job in the cow shed. She’s now reluctantly retired. She gave us a tour of parts of the kibbutz that no longer exist: Where the few cars for renting out used to be, where the children like her husband used to be raised as a group. We ended in a building featuring a large mural painted in the ’50’s depicting the immigrants who came from nothing in Europe to found this kibbutz by the toil of their hands. Seeing it made our Russian student laugh nervously, but things there are different now. Thai workers do most of the hardest work, people can own their own cars if they want to, the children’s house is now more of a daycare. These changes upset her and she voted against every one of them, but what can you do? Many things have stayed the same, however. When someone asked her what would happen if someone in the kibbutz wanted to study Torah all day, she responded with a vehement “Never!” and said the response would be the same if someone wanted to become an artist or a musician. There’s just no room for such things in this ideal society, you have to work. While her three sons served in the Army, neither of her two grown ones currently live on the kibbutz. I doubt if she owns a TV, either.

At one point, she said you can judge a society by how it treats its elderly and showed us their state-of-the-art home for elderly members of the kibbutz. This is a principle both women feel strongly about, as our host at Telz-Stone took great pride in explaining all the various systems in place to help the town’s poor and sick get all the food, clothing, and medicine they need to survive. Both women also viewed certain highly fortuitous happenings in their lives as cosmic seals of approval for their idyllic lifestyles, except that one called them miracles, the other coincidences. Total opposites.

If the Telz-Stone woman was up and the Ma’ale Hamisha woman was down, the Muslim woman we met was a container of lip balm standing vertically. She was born in England to a secular family. After visiting Israel and other events in her life, she converted to Islam and married a Palestinian man named Mussa. She now lives in Ain Raffa, which is right next to Abu Ghosh, which is right next to Telz-Stone. During the War of Independence (1948 -present), these Muslim Arab towns recognized the inevitability of Jewish victory and aided the Zionists. This has resulted in their being shunned by most of the rest of the Palestinian world and being the only Arab towns not moved after the State declared its independence. To this day, in spite of everything, even in spite of the government once mistakenly demolishing Mussa’s house, it is friendly to Jews and some of its sons even fight in the IDF.

It’s been said that Jews’ status as outsiders is largely responsible for their prominent role in American comedy and other forms of cultural criticism. As a non-Jewish Israeli, Abu Ghoshian Palestinian, and White Anglo-Saxon Muslim, this woman has chosen to become the Jewish State’s ultimate “Jew,” and I think that’s why I found her views so refreshing. Unlike so many Israelis, certainly unlike the other two women we saw, her outsider status requires her and her children to have regular interactions with those who are different; her position doesn’t afford her the luxury of chimeras. Examples of this are that she has Jewish groups over to her house to talk, sends some of her kids to (secular Zionist) Jewish schools where they are the only Muslims, her husband works for the Reform Movement, and they both pray for a day when their religion will stop being bastardized by terrorists. She further said one of the biggest mistakes the State has made was separate schools for religious Jews, secular Jews, and Muslims because if you don’t learn to live with each other from an early age, you never will. If this tiyyul to three very different Israeli communities perched on cliffs overlooking Jerusalem taught me anything, it’s that she’s right.

But before you can live with other people, you must first learn how to live with yourself. As much as I love Israel and Pardes, it’s sometimes all too easy to lose inspiration. Dealing with religious texts all day every day, toiling over ancient farming laws in foreign languages, and Halakhic minutiae, not having to try to be Jewish or even to make time to pray, God often gets lost in the shuffle. All too often, I find myself acting and thinking like the same old me with the same old weaknesses and the same old problems, except now instead of sitting in front of the TV all day, I’m sitting in the Beit Midrash. This lack of change in spite of a radically changed environment is all so subtle I hardly even realized something wasn’t right until I was jolted out of it by another outsider.

Earlier this week, I was reading a discussion of Two and a Half Men star Angus T. Jones’ Testimony to the power of Seventh-day Adventism and the filth of the show that made him famous on a Jewish blog. Pleasantly surprised that we shared the same opinion of his show, I clicked the link, intending to watch only a little of it, but ending up watching the whole thing. I’ll never forget it—the entire time, I just kept asking myself, “How did they film this? How can he keep track of what he’s talking about when he has to change locations in the middle of every sentence?”

But when I wasn’t being distracted by the extreme jump cuts, I was incredibly moved by his story. I related to so much of it: The indescribable experience of your first encounters with God, those moments when He feels so close, you can feel the warm embrace of Divine Love so real and so close that the only question you have left is whether or not God should believe in you. That ecstatic, almost naughty thrill, like (I would imagine) running away with a lover, or rebelling against everything you’ve ever been taught about what should make you happy, that is your first few Shabbatot. That moment when it first dawns on you that every moment of life is so jam-packed with meaning and holiness, and that 95% of what’s on TV is such garbage anyway that the thought of wasting even one more second of it on mindless crap when there’s God’s will to be done makes you want to cry. Except for all the stuff about Jesus, he was me six years ago.

Thankfully, I’ve since moved on since then, and my beliefs are much more nuanced and mature now, but getting that reminder of what got me started in this business to begin with was another much needed breath of fresh air.

By contrast, when I saw Shyne’s Ohr Somaych ba’al teshuva videos two years ago, I was so busy nitpicking the parts of his belief, practice, and dress that I found unnecessary or stupid that I couldn’t let myself learn much Torah from him. It took Angus Jones’ wholly different faith, with its Friday night-to-Saturday Shabboses, quasi-kosher menu, and belief in God, to provide just the opposite I needed to once again feel that spark of the One God in my soul.

This was all just a long way of explaining why I love outsiders. These two experiences have further justified my pride in being a contrarian at heart and reinforced my firm belief that I could never be happy in a community driven by firm beliefs. The spiritual crisis is where I feel most at home, that place of resistance is where my soul thrives. This means I feel so at home at Pardes because it is a rainbow of the most beautiful shades of gray, an island of misfit Jews where intellectual humility reigns supreme.

Now if you’ll excuse me, I’m going to go learn some Gemara, then maybe watch The Daily Show afterward.