Does Joseph really forgive his brothers? 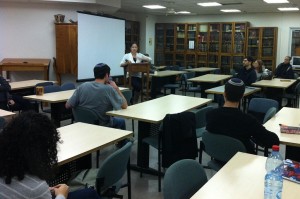 This week’s parasha is Vayechi, in which, among other things, Jacob dies and we see a scene of apparent reconciliation between Joseph and his brothers. At first, this seems to be an intimate moment in which everyone comes to understand each other, and by the end Joseph seems to be saying to his brothers: “Relax, it’s ok. We can move on. I’ll forgive you.” Though this seems like a fair pshat reading, I’d like to offer an alternative.

One question that is not clearly answered in the text is, does Joseph really forgive his brothers? Leading up to this speech of his, they ask him twice to forgive (pesha) them. Yet nowhere in Joseph’s answer does he say “I forgive you.” Rather, the scene ends like this:

[Joseph]: “Have no fear! Am I a substitute for God? Besides, although you intended me harm, God intended it for good, so as to bring about the present result—the survival of many people. And so, fear not. I will sustain you and your children.” Thus he reassured them, speaking kindly to them (vay-daber al libam).
– JPS translation (1999)

It is this last phrase, more directly translated as “and he spoke on their hearts,” that I will explore in this drash.

This specific phrase comes up in two other places in Tanakh. The first place we see it is in parashat Vayishlach. Jacob and his sons have come to the city of Shechem and Leah’s daughter Dinah is taken by Shechem, the prince of the land. He rapes her and then, in a twist of fate, seems to fall in love with her. And here we see our phrase:

One way to see this is a young man in love with a girl. However, if we take a second look, the situation is more complicated than that for a couple reasons.

First, Shechem’s track record isn’t so good. He has just raped a young girl, likely utilizing his power as a member of the ruling family in the process. Even if we accept that his intentions have since changed, he doesn’t seem to be someone who has finely tuned his ability to care about other people. More importantly, even if we do take his declaration of love as sincere, the dynamic between the two of them is inherently uneven. He may be declaring his love, but as an outsider who has just been raped and is now being kept hostage in the house of the ruler of a foreign city, Dinah cannot possibly have felt free to respond with any similar level of honesty or intimacy. Vay-daber al lev. In this case the al (meaning on), as contrasted with other possible word choices such as to (el) or with (im), denotes Shechem’s sense of superiority or authority.

From here, we can draw a deeper understanding of the same phrase in our parasha for this week, which is the second place this phrase shows up in Tanakh. Joseph is a ruling figure in the land of Egypt and his brother’s position there, as they seem to well understand, is entirely dependent on their standing as his family. Taking a broader look at the conversation, we see that Joseph’s brothers “fling” themselves before him (Vayiplu l’fanav), and in this new reading our image is no longer one of an intimate brotherly conversation, but rather a group of men at Joseph’s feet, fully aware that their fate is very much up to him. Just as Dinah was not free to be fully upfront with Shechem, neither do they have the room to risk a truly honest confrontation with Joseph.

The final place we see vay-daber al lev in Tanakh is in Chronicles II, Chapter 32 Verse 6. King Hezekiah is preparing the city of Jerusalem for an attack from the Assyrian army. He gathers his officers into the city square and:

Here we see an instance of a King rallying his troops. We see both a superior/inferior relationship and, something we did not necessarily see by Shechem and Dinah, a personal distance between speaker and listener. There are many of them and one of him, and he is certainly not speaking to each of them individually. Neither honesty nor intimacy is a factor here. Rather, Hezekiah has a larger goal in mind- that of inspiring and uniting the leaders of his army.

Taking this to our parasha, perhaps we can interpret a certain distance between Jospeh and his brothers during their conversation as well. They’ve been estranged for the better part of his adult life and he is an entirely different person than the last time he saw them. Similarly, moments earlier in Bereishit hint that his brothers have changed significantly as well. Despite the teary reunion, this is not a conversation between a group of brothers who know each other well, and I think we can read in Joseph’s response an acknowledgment of that distance as well as an understanding of the larger significance of their conversation.

If we look carefully at what Joseph says, we see that he perceives an intentionality in the path that God set before him: “…although you intended me harm, God intended it for good.” Not only this, but he sees that his brothers and their future generations are part of a larger plan. This long-term view is why he allows them to stay, rather than any personal feeling of connection. Given God’s larger plan, he is not going to throw them out of Egypt, but he isn’t necessarily going to pretend that what they did was forgivable either, or that their relationship as brothers is salvageable.

Based on this reading, I think we can see significance in the fact that this is how the book of Bereishit ends. In parashat Noah, at the end of Chapter 8 Noah has just gotten off the boat and is burning a sacrifice to God. Almost immediately, either because of the order in which Noah and his wife and sons exited the ark, or because of something to do with the sacrifice Noah is offering, God realizes that his plan did not work. Man, despite God’s efforts, will always be inclined to evil. In this realization, we see something reminiscent of our phrase vay-daber al lev. This time, however, it’s:

Va-yomer Hashem el libo.
And God spoke to His heart.

The connotation of al, or on, is no longer here. God, speaking to himself, is able to reach a level of ultimate intimacy and honesty that humans do not seem capable of.

Despite this key difference, there is a significant parallel between these two scenes. Both are moments of conclusion at the end of a disastrous saga. In both, there is an apparent choice between anger and forgiveness. Both Joseph and God feel, legitimately, a sense of betrayal. Yet, if we look closely, in Noah God chooses something in between revenge and forgiveness. It’s not that He forgives man for his imperfection, but rather that He lets go of the need for perfection. He does not promise never to get angry again. Instead, He sets up a system- the rainbow, which will remind Him to check his reaction whenever he does (inevitably) get angry. He knows that, despite His failed expectations, the only option left is for man and God to learn to live with each other.

Fittingly, Lev in the Torah doesn’t mean heart in the way we think of it today. When I first read the phrase vay-daber al libam, the term ‘heart-to-heart’ immediately came to mind. But in the Torah, the word lev more accurately means mind. Though the moment is emotional for him, Joseph is really speaking to his brothers rationally. He is telling them that, although they betrayed him, completely changing the course of his life in the process, they, like God and man, will have to learn to live with each other. God understands this need for a middle ground between emotion and rationality in Chapter 8, but it takes man until Chapter 50 to understand it. Joseph does. He sees the larger picture. He knows he does not have to forgive his brothers- perhaps he can’t even bring himself to. Yet, he is able to see past his own personal hurt and anger, and understand God’s larger plan for his brothers and their future generations.
In trying to see how we can apply this idea to our own lives, I think the most important thing to realize is that this is something God has to learn. It is not easy. It’s not even obvious. Yet, it’s how we close the first book of our Torah. As we move out of the world of creation and into the real world we will, as a people, face a whole new host of challenges and betrayals. I think we are meant to learn to push ourselves, as a people and as individuals, to have the humility and patience to admit when we are limited by our own anger or failed expectations and to have the presence of mind not to let them overcome us. It’s something we can all stand to remind ourselves of from time to time.