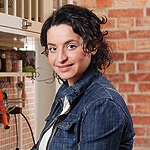 I dressed up in white. Because whenever I am preparing to do something big, I always wear white. This is a principle of mine since I have known Zsolt Erőss. Zsolt – a Hungarian mountain climber. Zsolt, who told me that when they prepare for the final climb, for the final 200 meters in the Himalayas, the so called peak attack, they wash with melted snow and dress up in white.

I had the chance to work at the book publishing company where Zsolt’s books were published. I edited, I marketed and I got to know a great mountain climber. This was more than 10 years ago. Since then I follow his hikes and I am proud of him and proud of that I know him. Zsolt started climbing when mountain climbing was not fashionable, he really was climbing for the sake of climbing and the spiritual experience. With a huge commitment and an eternal love of life. Two years ago he had an accident in the High Tatras and his leg was injured that much that it had to be amputated. He got a special mountain climbing prosthesis. Recently I knew it but only passively that he was climbing again. I saw the posts on Facebook and did not have time to read them. But I thought about him several times last week, because I was also preparing for a so-called peak attack.

On Sunday I was looking for a Mikvah. — Cover your head and no-one will ask whether you are married or not. — But that is cheating. — I said and called some more Mikvahs and I admitted to some of them that I was going to read from the Torah but all of them put down the phone on me. Then I chose the most reform half-solution and went to the Jerusalem pool to swim.

I know that one does not have to go to the Mikvah before Torah reading but I also know that women usually do not read from the Torah. But since I am a student of such a liberal school, I thought I give it a try and since it is such a big thing, I tried to prepare for it the best as I could. And I repeated the portion at least 8 million times and finally a miracle happened and I somehow learnt it. I felt like I was going to go for my Bat Mitzvah — which was by the way at the Kotel back then when Women of the Wall was just formed.

So I dressed up in white, hopped on my bike and rode to Pardes in my long skirt. At the davening I noticed that I already can follow the order of the prayers, so maybe I can leave my English translation Artscroll and buy the pink covered one in the Mea Shearim what I long for a little bit. And then the time of the reading came. The Yad somehow was handed into my hand and I started reading. Rav Landes, Hillel and Hannah around me and…

… some miracle happened there. I was singing: “Take the Levites from among the children of Israel as to purify them. Sprinkle on them purifying water” and so on and so on. I could hear my “very beautiful”, shaking voice in Hebrew. I did not make any mistakes even in the chet-s and the he-s.

The time was slow and I did not rush into it. Time and me, were together simultaneously.

When I went back to my place, I heard quiet psssh-s. At the breakfast I received many Yesher koach-s. Than I ran to my ulpan and as I entered, something was probably beaming from me, because all four classmates of mine and the teacher asked me what happened and I told them and they also said psssh and their eyes sparkled. My already not that conservative heart filled with love from somewhere beyond material reality. And this feeling stayed with me for a few days.

Reading from the Torah is like heroin can be. As Irvine Welsh would say: “Take the best orgasm you ever had, multiply it by a thousand and you’re still nowhere near it.”

The same day in the afternoon I opened the news and read that Zsolt was climbing to the peak that day. … And he got lost. He had not talked into his radio since the peak attack. And his friends knew he did not have enough water. I imagined him in his white clothing walking down and finding water. In the big white. The color of mourning in my religion. Zsolt always was prepared for death. He lived as death was a part of life. This time he went a little above the peak. His funeral was a hike in the Transylvanian mountains.

We live with death. It is part of our lives. The end of each section of our lives is a death. We die a little when we leave now. We finished something. Or started something. But we definitely do not want to stay at this stage but want more. More learning, more reading from the Torah, more peak attacks.

I wish you all such a committed life what a mountain climber or a Torah reader can live.