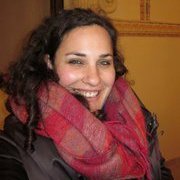 As a young woman growing up in Washington, DC, Merissa was heavily involved in race dialogues, and later came to feel that her complex Jewish identity was ‘swallowed up’ by her identity as a white person. In college, Merissa continued having difficulty articulating her Jewish identity, and felt uncomfortable at the WUSTL Hillel. Her group of mostly Jewish friends were unified by common interests – by music, culture, and their love for the outdoors – more than by Judaism itself.

Merissa’s rooted, deeply internalized Judaism stood on the pillars of culture, ancestry, and family, with Holocaust memories at its base. Her father had grown up in DP camps in Uzbekistan, and her mother’s father had fled in the ’30s from the devastating pogroms in Germany before the eruption of WWII. They were a family of proud, committed Jews, coming together for Shabbat dinner every Friday, and celebrating it once a month with other families from the Adas Israel Hebrew school. She came from a strong Jewish community.

During her senior year of college Merissa studied abroad in S. Africa, and fell in love with a Rastafarian who believed in the tenets of Judaism. He believed in gratitude for all things; believed that nature was an element of G-d; and believed that one could see blessings and spirit in all of creation. Abroad, Merissa found the space to explore her own spirituality. Eventually, she found herself driven to go on a personal ‘spiritual search’, which took her to Israel after college graduation.

When Merissa returned, she moved to Martha’s Vineyard, and began attending Shabbat services every week while working as a farmer… marking the first time that she had ever regularly attended shul on her own convictions. For years to follow, the adventurous spirit moved from place to place and from job to job – working as a Hebrew school teacher, lamp maker, waitress, writer, etc. – and made a point of finding a shul that spoke to her everywhere she lived.

In 2006 Merissa moved to Boulder, Colorado to study at Naropa University for an MFA in writing and poetics. As she sought inner peace, her work came to focus on her family’s Holocaust history and how trauma would resurface in the body. She also began regularly having conversations about Judaism as she explored the shuls of Boulder; and she discussed spirituality with monks and yogis, even as she studied Jewish mysticism.

After traveling for several more years and participating in multiple writing residencies around the country, the young writer eventually realized that she needed more Jewish knowledge for the sake of her work. As she neared the end of her residencies, Merissa again felt spiritually drawn towards Israel. She found work at an African refugee development center in Tel Aviv for the summer of 2010, and then applied to Pardes for the year upon the recommendations of her friends and family.

Among her most powerful Pardes experiences, Merissa recalls her visit to the town of Zamosc during the annual Pardes Poland trip… the town where most of her father’s family had been murdered by the Nazis. For this child of a Holocaust survivor family, the trip was particularly meaningful.

Beyond this, the young seeker found a supportive, spiritual community among her classmates in the Pardes Self, Soul & Text Track, and learned much about Jewish spiritual practices with Rabbi James Jacobson-Maisels. Of course, Merissa can best describe her own impressions… and her recent, beautiful writings (1, 2, 3) for Lilith Magazine reflect some of her personal growth and Pardes experiences!