Posted on December 5, 2011 by David Bogomolny 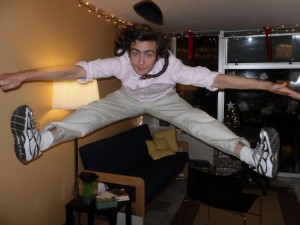 Michael (pronounced Mee-kha-el) originally hails from Portland, Oregon, where he was the only person in the whole city who had shoulder-length payos (sidecurls), and he was often mistaken for a girl until the age of eight or nine because many people did not know what payos were. His parents, two Reform rabbis, had followed a Chassidic custom, and did not cut Michael’s hair until he turned three years old, leaving his payos to grow.

The reason that my payos became so important to me lies in the manner in which my Ima explained my payos to me.  She made a connection to another mitzvah… that is also called pe’ah.  In Leviticus 19:9 it says:

These parts of the field are to be left for the poor, and this explanation was very salient to me.  In fact, when I was five or six and my barber asked me why I had payos, I once replied. “To feed the poor.”

Wordplays aside, as I got older, it became very meaningful that a physical part of me could represent two things that I viewed as so important: Judaism and the quest to help those in need.

Michael’s parents ran a Jewish outreach program out of their home, inviting dozens of people to their house every Shabbat, and as a child he “didn’t have a concept of not having guests for Shabbat dinner.” Michael recalls complaining to his parents on those very rare occasions when they weren’t hosting, and as a college student he continued to host Shabbat guests himself through a like-minded organization called ‘Heart to Heart’, which a friend of his founded at UPenn.

While his parents are Reform rabbis, Michael found his Jewish home in the ‘Orthodox Community at Penn’, as it was the dominant Jewish community at his university. “It was the community for whom Jewish living was central to their lifestyles, which is what [he] was used to from [his] childhood.” Now having graduated from UPenn, Michael continues to feel that he’s most likely to find the intensity of Jewish living that he is most comfortable with in the Orthodox community; although he doesn’t “have a fixed religious philosophy, and intend[s] to spend [his] whole life answering theological questions.”

Unfortunately for us, Michael will be leaving Pardes next semester to travel around southeastern Asian before he begins his doctoral work in molecular biophysics and biochemistry at Yale, but his kind smile and easy manner will be remembered. In fact, many of Michael’s teachers also remember his sister Avital (2009-10) with great fondness, and we’re all very thankful that she recommended Pardes to her younger brother 🙂

I knew I would be comfortable at Pardes. It’s a wonderful community – a very comfortable community for me – and the learning at Pardes is exciting! Leah Rosenthal’s Gemara class is very intersting – she’s a clear communicator – and she’s really helping me understand the details – not just conceptually – of how things are working mechanistically. It’s really fundamental to ultimately being able to learn on my own!