“What influenced me the most was how my parents acted toward others. Both of them were my role models. Both were black sheep… I like black sheep :)” 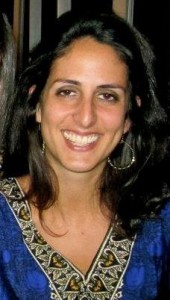 After escaping from Hungary during the Holocaust, Carolina’s grandparents didn’t affiliate themselves with the Jewish community of Venezuela, and raised their children without much Jewish tradition… so it came as no surprise that her mother married someone outside of Judaism. Neither her mother nor her father were particularly religious, but both were very spiritual, and she grew up attending family events at both churches and synagogues… both Jewish and Catholic, and neither at the same time.

A tragic car accident took her father’s life when Carolina was 16 years old, and dealing with the loss changed her profoundly. She started looking at the world through different eyes, and enrolled in philosophy classes at her French high school. Then at age 17, Carolina left Venezuela because her private high school diploma was not accepted there. She could have gone to France, but instead she chose California.

At California State University, Long Beach Carolina’s diverse group of friends were into philosophy, political science, psychology, international studies, and religion… but she distrusted ideology, and had never really experienced religion in a meaningful way. At her International House Residence Hall, Carolina became friends with people of various faiths and cultures, but when pressed she insisted that she was simply Venezuelan.

After graduating and working for a year in Los Angeles, Carolina was accepted to the Columbia University School of Social Work, and moved to NYC for student orientation. Just then her mother, sick with emphysema, was informed that she needed a double lung transplant, and was only expected to live for a few more years… and Carolina quit her program to move back home with her mother.

While she had been studying and living in California, Carolina’s mother had developed an interest in Jewish mysticism and meditation, and had connected with a small, egalitarian Jewish community. Mother and daughter watched Jewish movies together like Fiddler on the Roof and Yentl, and her mother confided to her that perhaps she had  been wrong to raise her without a Jewish tradition. Two years later, Carolina returned to NYC at her mother’s behest, but continued to travel back and forth to Venezuela until her mother passed away during her 2nd year at Columbia.

“I chose a Jewish name for myself: Liora. My mother’s smile and pride had been my light, and now I need to be my own light…”

In 2010, Carolina  graduated from Columbia, and received a grant through her International House in NYC to support the work of the African Refugee Development Center in Israel (ARDC). Having worked with the children of Ganean and Liberian refugees in Long Island, and having grown close to them, Carolina felt that working with refugees in Israel would be a good way for her to connect with the country.

When her work at ARDC ended, Carolina entered the WUJS Jerusalem Learning Program, and enrolled at Pardes for the semester of Fall ’11. She’d been impressed by reading about the Pardes ‘Social Justice’ and ‘Peace & Conflict’ tracks, but R. James Jacobson-Maisels’ class on the Aish Kodesh touched her in a way that she never expected.

“Even though I can’t compare situations, I can connect to the downs and the depressions of the context. And despite all the ugliness, and all the darkness and all the trauma, it’s incredible to find someone who can still inspire people in such a way… When you are in those situations you are pushed to the limits of what you can do… something about the Aish Kodesh transcends everything… he’s just amazing.”

After her semester at Pardes, Carolina is traveling to India for a good friend’s wedding, but she’s planning on returning to Israel in June… and making Aliyah to pursue social justice in the Jewish homeland.