Emly Oren left Israel with her family at the age of four, but in many ways Israel never left her family. At school in Orange County, Emly was the only Israeli student; but her family continued to speak Hebrew at home, and they only watched Israeli television programs. The Orens would travel to Israel every summer to visit all of their relatives, and they would sometimes stop by other locations en route to their main destination.

As a child, Emly drew no distinction between being Jewish and being Israeli. Her traditional, secular family would remain at home together on Friday evenings for Kiddush and Shabbat dinner; and every year they would attend services at Chabad for the High Holy Days, but Emly felt no connection to that environment because it didn’t reflect the rhythm or culture of her family life. When Emly somehow decided to have a bat mitzvah, she chose to hold services at a local public library… and of course, her bat mitzvah party theme was ‘Israel’.

This was a pivotal point in Emly’s childhood, as she soon joined USY, and was exposed to other young Jews for the first time. She came to realize that being Jewish and being Israeli were actually two related, but separate facets of her identity; and she learned that synagogues were not only for the High Holidays. Her USY friends also told her of Jewish summer camps and Jewish religious schools. Through USY, Emly found a personal, compelling way to express her own Jewishness, and she ceased feeling like an outsider at public school. 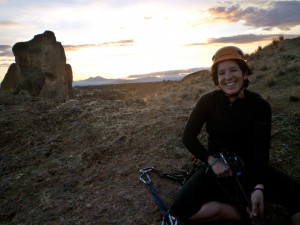 Always active and adventurous, Emly ran cross-country, played the flute and basketball, went rock climbing and camping, got her first job when she was but 16, and spent the first four months of her Junior year of high school living on a farming kibbutz in Israel – marking the first time that she’d lived in Israel independently. She returned again the following summer on a Birthright trip, and remained in Israel for several months with her family.

At Cal State Fullerton, it didn’t take long for Emly to get involved in Hillel and join a student Israel advocacy group, which led her to the annual AIPAC conference in Washington, and peace work with Israeli and Muslim students on campus. Her love of Israel also compelled her to spend a year abroad studying at Hebrew University, and she found herself returning somewhat reluctantly to complete her psychology degree in America.

Back in America, Emly’s boundless energy drove her to work at an underage prostitution shelter in Los Angeles, become a USY advisor, teach at several different Hebrew schools, facilitate the outdoors high ropes and low ropes courses at Camp Ramah Ojai, lead eight Birthright trips to Israel, pursue her graduate degree in clinical psychology at Pepperdine U., and work as a life skills therapist for adults with disabilities. As she completed her thesis on ‘ecopsychology’ and received her Master’s degree, the young woman came to feel that she really wanted to continue working with people, working outside, and working in the Jewish community. 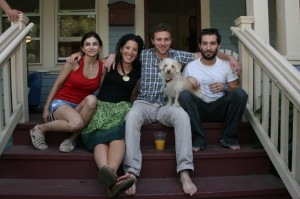 Moishe House Portland residents
Emly is 2nd from the left

Not long after graduating, Emly joined a friend of hers in becoming a founding member of the Moishe House in Portland, OR, and quickly became a leader of the local young adult Jewish community. In her “spare” time, she worked as a therapist at Jewish family child services for adults with disabilities, volunteered to work with at-risk females in an outdoor setting, and received certifications in ‘wilderness first responder’, CPR, first aid, and high ropes and low ropes facilitation. As she learned and grew as a community leader, the dream of living in Israel gradually crept its way back into Emly’s thoughts, and she began to make plans for her return.

Leadership at Moishe House had given the young woman a taste of Jewish learning and tradition, as she found herself sharing divrei torah, making Kiddush, leading Shabbat services, and attending Moishe House retreats, which by her account are mini versions of Pardes. As Emly discussed her move to Israel with her rabbi, he mentioned that Dr. Meesh Hammer-Kossoy would be teaching at a Moishe House retreat in Santa Barbara in December 2012; and the two women spent many hours there talking and walking on the beach together. “Just come” and try it, Meesh suggested.

Cautiously, Emly came to Pardes for a week at the beginning of the Spring 2013 semester, testing herself to determine her motivations, and found herself enjoying the challenge. For the first time, she began probing the nuances of her Jewish identity while living in Israel, and was reminded of her realization as a bat mitzvah – that being Jewish and being Israeli were actually two related, but separate facets of her identity. Now, as she works for the Israel Trauma Coalition and coordinates outdoor programs for disabled adults through ‘Etgarim Jerusalem’, Emly is finding that Pardes helps ground her Jewish identity in Israel… and she is cautiously considering the possibility of continuing her learning in the coming Fall.