Posted on April 5, 2013 by The Director of Digital Media 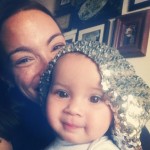 Whitney Fisch grew up within the Reform movement in Marietta, GA. She started her career in Jewish communal work at the University of Georgia Hillel as the Jewish Student Life Coordinator, which led her to other positions in the Jewish world, most notably as the Outreach and Education Coordinator at the Jewish Council on Urban Affairs in Chicago and Education Director for the Anti-Defamation League’s Florida region. Tired of being considered a ‘super Jew’ for working in the Jewish world but feeling like she needed or even required more Jewish education for such a title, she decided to attend Pardes’ year program from 2008 – 2009. She met her now husband while in Jerusalem for that year. She is a middle school counselor at a private Jewish day school, a new mom and blogger at JewHungry.

Eight months ago my life forever changed… I became a mother of a daughter. My husband and I decided to find out the sex of our baby at 20 weeks and, of all things to say to all people, the ultrasound tech looked at me and said, “Oh! You have a little princess!”

Oy. Listen, I get it. Our culture celebrates women/girls as princesses. But in that moment, in that exact moment, I thought to myself, “this is exactly what is supposed to happen.” See I’m a social worker. I’m also a feminist and a school counselor and I’ve made it my mission to educate girls to find self-confidence and connection to the self and their Judaism not by the fact that someone finds you ‘sexy’ or ‘cute’ or by the fact that their job is to be mamas and make babies, but by whatever it is they have chosen as their passion (which, by the way, could very well be in being a mom or a wife). I live and work in Miami and my job is an uphill battle, to say the least. For example, on a recent trip to the office supply store for construction paper for my Girls Group, I noticed a new billboard on the corner where our Jewish day school is located. It is a before and after billboard advertising breast implants. The image is of breasts, just breasts, no head or body, in a bikini top before the implants and then, of course, the after. This is Miami we’re talking about, folks. I got Kardashians coming out of my ears and skin is in so when I took on the task of helping our girls build healthy, positive sense of selves, I knew my job would be difficult.

However, my job is difficult for a whole other reason and that is that I also want to connect my girls, and my daughter for that matter, to their Judaism. But you see, I’m stuck. As I research and try to create programs and experiential learning opportunities for my female students I realize that we, Am Yisrael Chai, are divided. It’s no secret that Judaism celebrates separation—-day and night, shabbat and the rest of the week, kosher and non kosher, tov and rah—-at it’s foundation, the impression I’m left with is that Judaism celebrates separation but what do we do when that spills over into education? How can we shout, “Am Yisrael Chai!” and educate boys and girls differently? What does Jewish girls’ programming look like outside of challah-baking, mikveh-visiting and candle-making? Please understand, I work and live in an Orthodox lens. If I were working and living in another movement (for example, the Reform movement that I was born and raised in), these questions might not exist (but others might). However, I do work and live within the Orthodox movement so the questions, for me, do exist. What happens if one of my girls chooses not to get married or doesn’t have children? Don’t we owe it to our girls to help them connect in ways that don’t have the potential to alienate? It’s up to us to validate all of our children or at the very least, help let them know that their experience, whatever it may be, is valid. How do we let our girls know they have value outside of mitzvot that, again, as I understand it, were developed in the context that historically, women were ‘alieviated’ from because they had children to look after?

I don’t have the answers to the majority of my own questions and yet I feel a sense of urgency to find them. I have roughly 500 girls to reach and one special daughter to educate in a very short amount of time and I don’t even know where to begin. So I ask you, dear reader, what would help you connect Jewishly? What DID make you connect Jewishly? What inspired/s you?