Rosh Chodesh Sivan at the Kotel 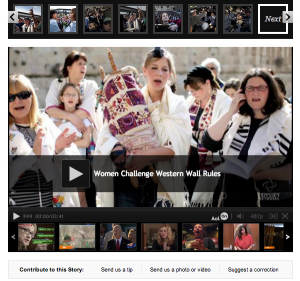 Friday morning was a blur. A scary blur. I didn’t wake up until 6:24 AM when my roommate screamed, “WIESE.” And I jumped out of bed, how could this happen, on a day that was so important to me? Never mind…we jumped in a taxi and I ran down to the women’s section with my bag. I couldn’t even get to the regular spot because there was a sea of light blue shirts of seminary girls from all over Israel. I quickly realized that they had been bussed in for the exact opposite reason I was there. I ran into my dear friend, and later saviour, Melissa. She was also lost. We didn’t know where “Women of the Wall” (WOW) was praying because there wasn’t space where they normally gather. (Smart thinking ultra-orthodox girls…if there isn’t space, maybe they can’t pray at the Kotel. Makes sense.) We went down together into the sea of blue, maybe they were there somewhere. They weren’t. But it was time to daven, so Melissa started pezukei dezimra (the “warm up” blessings, as I like to call them,) while I started to put on my tefillin. It was worse than the paparazzi that normally come to women of the wall. The girls thought they were seeing an alien or the devil…it was true what their rabbi told them, there are women who put on tefillin! They started taking pictures of my and then scuttled away, they didn’t want to be too close, maybe I could contaminate them. Many were already tisking at the action. But then, I pulled out my tallit (I know I should put on my tallit first and then tefillin, but there isn’t a lot of space and it’s difficult, so I reverse the order,) it was like poison. The girls backed away like if touching it would burn them, or something worse. They started making this hissing noise, I have never heard such a frightening/bizarre noise in my life. No one wanted to talk to me, it was too shocking to them. And I was there alone with my tallit and tefillin. I still didn’t know where the other women were. Melissa had finished pezukei dezimra and she looked at me, we knew we had to get out of there. It wasn’t safe. I was already flustered. Melissa, calm and cool, took my hand and started leading me up. We realized the other women were by the flag pole, behind the mechitza (the wall that divided the men’s and women’s section.) I knew what they thought of me, I started feeling showers of spit pouring down on me from every direction. They really couldn’t have thought that I was human. I’m sure their rav (rabbi) told them that someone like me was the devil and desecrating HaShem (God.) But what did they think of Melissa, or us together? Melissa is, for one, a hero and role model of mine, and two, she is religious, and she dresses the part. As in, she wears long skirts, covers her arms, and since she is married, covers her head. She is what these girls would view as religious, more like them than like me. She was holding my hand and helping, saving, protecting me from them. After one girl spit on me I asked her in Hebrew, “Really, you think this is respectful to God? What are you doing?” She was so shocked, one that I knew Hebrew, and secondly, that I talked to her. She seemed really embarrassed and freighted. She hid her face from me, she didn’t want to talk to me and she didn’t want me to address her. But I hope I made her think.

Somehow, through the yelling and spitting, we made our way through the mass of girls. I realized that the Women of the Wall, had been barricaded in and there were police lining the barricade to protect them. There were men and women praying together (which was new) it was forced this way by the Haredim. This isn’t the mission statement of WOW. But I was so flustered by the previous events, it was hard to concentrate on praying. I didn’t want to go into the group of “regulars” from WOW that were praying together up at the front. I didn’t want to be in all the pictures and have cameras in my face. What was happening? We were surrounded by ultra-orthodox men and women throwing bottles, chairs, coffee grounds, throwing bags of excrement, blowing whistles to disrupt the prayers. And screaming. They would rush in mobs against the police is had to use all their might to hold them back. 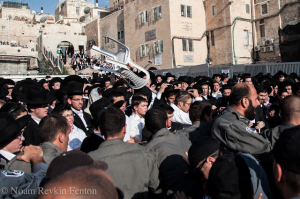 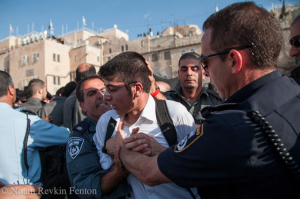 Police restraining – who knows what they would have done if they got through.

All of it was too much to take in. I found my friends (male and female), and even though I don’t prefer it, it was nice to stand next to them, I felt much safer. We sang Hallel, and I was next to a very dear Israeli friend of mine who is very secular, isn’t religious at all, but he really supports WOW. He didn’t know the prayers, so we shared a siddur, and it was such a wonderful moment for me to be there with him and to pray and praise God (I don’t know if he actually believes in God) together. I glanced around and saw many smiling faces of my friends and people who I didn’t know, but recognized me, either from the street or the newspapers, or just smiled because we were all in this together. No one was going to let anything happen to someone else. 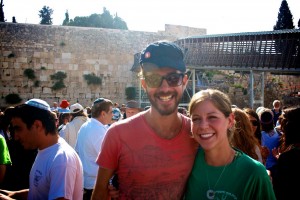 Me and my friend, Shai, after davening.

There was also a little girl, 12 years old, who read Torah and celebrated her Bat Mitzvah that took place only a week before. Her mother held her on her shoulders and everyone cheered and clapped and sang at the top of our lungs. Despite the disgusting situation, it was so easy to focus on this beauty. The first Bat Mitzvah at the Kotel…maybe ever? 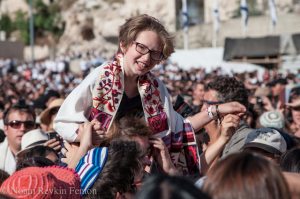 Mazal tov, beautiful young lady, you fill my heart with such joy and hope…

The other amazing thing, four months ago, when I was terrified to put on my tefillin, the only one, the first…in every newspaper, noted in one headline as a “Crack in the Wall;” on Friday there were numerous women in tefillin! This is a common practice. Listen, world, women wear tefillin and tallitot, it’s not a novelty. It is real and happening and it’s happening in Israel, not just the United States.

Later that day my mom sent me a text message saying that she and my cousin were going to a Women of the Wall demonstration in Chicago. I felt so much pride and courage. My mom doesn’t know so much about Judaism, even though she is very involved in our Temple where I grew up. But there has always been something in her that pushed her to be Jewish. She wanted us to be Jewish even though she couldn’t/didn’t know how to raise us with so much Jewish tradition in our home. So maybe I inspired her as much as she has inspired me. I wish we could have been physically together, either in Jerusalem or Chicago, but maybe in some way we were. I could never be the woman I am without her. She is with me everywhere and in everything I do. Even though she has never worn tallit or tefillin in her life, I know she gives me the courage to do it myself.

Something that I’m still thinking about, and I don’t totally know how I feel about it is how extraordinary it was that thousands of young women came to a protest. I understand that they are on the opposite side and maybe they feel like they are only listening to their rav. And maybe they think I am the devil and that I’m going to hell. But I see this as an important step. These young women are taking a stand, someone is empowering them. I know this isn’t their rabbis intention, but I KNOW that some of them were thinking for themselves. Some of them realized how different this was. Some of them had to think, maybe there is another way to pray. Maybe there are other ways to be Jewish. Maybe I can also read Torah, maybe I can pray out loud, maybe I could come here by myself. I don’t agree with the spitting, but I do agree with standing up for what you believe in. (maybe they were just following blindly,) but even this is okay. Some of them will get it, something will click inside of them. Women are smart, even if they have been brainwashed their whole lives.

Suddenly, I realized that I had to somehow get out and go home. But how? Surrounded by thousands of ultra-orthodox, the police told me I should wait and not go out yet. It wasn’t safe. Eventually, after much contemplation, I just went for it. My roommate, who is 6’7” was with me. I assumed nothing could go wrong. We encountered more yelling and more spitting, but nothing too serious. Before I knew it, we were at the gate. There, to my delight was my favorite policeman, who just a few months earlier, was instructed to take my tallit away from me. That day he had said that he didn’t want to take it from me and that he really liked when we came and sang. And now, we embraced. I joked with him, “Why are you out here, all the action is inside?” He smiled, I knew his post was near the metal detector. He told me how excited it was that things are changing, “Kol Hakavod, it’s happening!” The police behind him was also excited and said make sure you come back next month, the time is now, the Haredim can’t win! The women have to be strong.