Posted on November 22, 2012 by The Director of Digital Media

If Leah were alive today, this is what I think she would tell us.

“‘It was the best of times, it was the worst of times.’1 Rahel and I are twins2 born five minutes apart. I am the older sister, and like any set of twins, we had our good days and we had our bad days. Let me tell you a little bit about my bad times. They started when I heard father planned to marry me to Esav, an unknown relative who lived far away. I had heard many stories that he was a cunning hunter and a wicked man, known to rob people.3 I feared him and I cried all the time. People ridiculed and mocked me, “Leah’s eyes are weak!” (29:17). They constantly compared me to Rahel and taunted me with their chant: “Rahel’s shapely and beautiful!” (29:17) It felt awful to be compared to her. These words were a dagger thrust between us. They pushed us very far apart. Was that their intention? Were they jealous of our special bond as twin sisters that they wanted to destroy it?

Just when I thought our relationship couldn’t deteriorate any further, it did. Yaakov, a distant relative suddenly appeared at the well and kissed Rahel! When Rahel came running home after meeting Yaakov, she went straight to talk with our Father, Lavan (29:12). I wanted to hear what she told him but I was left out of their conversation. Only later that day did Rahel run to find me, full of smiles, as she danced and laughed. I became totally absorbed in her joy. I hugged her and joined her dance and laughter. Instantly, we returned to the days of our childhood when we delighted in each one’s happiness.

When Yaakov arrived to our camp, I immediately saw by the way he looked at Rahel how much he loved her (Gen 29:18) and she told me she also loved him. However, their joy was short lived. Father acted like he was thrilled that his long-lost sister, Rivkah’s son Yaakov had arrived. He “ran to greet him; he embraced him and kissed him and took him into his house”(29:13). They talked for a long time but to this day, I don’t know the details of their conversation (29:13).

Yaakov worked hard helping with our sheep. After a month, Father started negotiations with Yaakov and then the real trouble began. Father wasn’t to be trusted-he drove a hard bargain and then afterwards sought to deceive Yaakov. Their deal: Yaakov agreed to work for Father for 7 years so he could marry Rahel, “and they seemed to him but a few days because of his love for her.” (Gen 29:20)

The seven years might have seemed like a few days for him and Rahel, but for me, the days went by very slowly. The months and years felt like a lifetime. I saw them grow increasingly close and I felt left out. I missed having special time talking with Rahel, my twin. She only shared her dreams with Yaakov and no longer talked with me about anything other than Yaakov, “Yaakov said, this, Yaakov said that.” I worried, “Who will I marry? Who will want to marry me, the older twin?” I heard people in our clan whisper the same questions, pointing and laughing at my expense. As time passed, Rahel also heard their cruel words and I saw she felt my pain in the unique way sisters do for each other. But neither of us had a solution to my quandary.

Finally, the seven years passed and it was time for Rahel and Yaakov to marry. Father gathered all our neighbors together and made a huge feast. During the celebration, right before sunset, Rahel pulled me into a quiet corner in her tent. She told me that she and Yaakov suspected that Father planned a trick. They designed a sign so that Yaakov would know it is her during their wedding celebration. Then to my great shock, she said to me, ‘Leah-I have seen how hard it is for you that Yaakov loves me. During all these years, Father hasn’t tried to find a husband for you. I think that Father is going to bring you to marry Yaakov, claiming you are me. I don’t want you to be shamed in front of Yaakov, Father, or our neighbors. Here is our sign. And I will be under your bed-when he speaks to you, I will answer so he recognizes my voice and knows you are me.’4

I didn’t know what to say or feel. I hugged her tightly. We didn’t have any more time to talk because suddenly Father entered Rahel’s tent looking for me. ‘I’m taking you to Yaakov’s tent now.’ He grabbed my arm. I didn’t have time to ask him any questions or think about what would happen to me, Yaakov or Rahel in the morning.

I don’t want to share any intimate details of our wedding night. Any joy I felt being with Yaakov was shattered when I woke up and heard Yaakov shout at Father, “What is it that you have done to me? I was in your service for Rahel! Why did you deceive me?” (29:25)

Did Father try to protect me in any way? I don’t know why I would have ever thought he would stand up for me. In a matter-of-fact voice, Father replied to Yaakov, “It is not the practice in our place to marry off the younger before the older. Wait until the bridal week of this one is over and we will give you that one too provided you serve me another seven years.” (Gen 29:26-27) Can you imagine how hurt I felt hearing Father’s cruel and cutting words? He didn’t refer to me by my name rather he called me “the older”. I never asked Rahel but I imagine she felt the same way when Father referred to her as “that one too”.

Yaakov carefully counted the days until our bridal week ended but he was angry with both me and Rahel. That time in my life should have been filled with joy and dreams but instead everywhere I went, I felt his anger and saw our neighbors stare at me with pity and scorn.

A week later, Father gave Rahel to Yaakov to be his wife. At their wedding feast I was present in body but not in spirit. I didn’t speak to anyone. Yaakov loved Rahel with his complete soul. Will he ever love me? Will I ever again feel close to Rahel and she to me?” 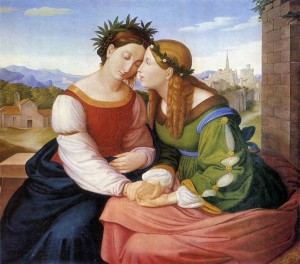 As we know, the tale of two sisters, Leah and Rahel, didn’t end here. Leah gave Yaakov many sons while Rahel was barren. According to a mdrash, Yaakov thought about divorcing Leah5, but changed his mind because of their many sons.

There were better times ahead for Leah, Rahel, and Yaakov as they welcomed more children into their family. After Leah and Rahel made a deal and exchanged the mandrakes (Gen 30:14), Leah gave birth to two more sons. After the birth of her last son, she said, “God has given me a choice gift; for this time my husband will exalt me, for I have borne him six sons. So she named him Zevulun. Last, she bore him a daughter, and named her Dinah.”(Gen 30:20-21) Rahel, after her painful struggle with infertility for many years, finally gave birth to Yosef. (Gen 30:23) The midrash taught that from the day God created God’s world, God was not praised by anyone until Leah said, “This time I will praise Adonai.” (Gen 29:35)

For many years, Leah and Rahel struggled with each other for Yaakov’s love and attention, but finally I see a transformation in their relationship. In the beginning of our tale, Leah and Rahel were treated as property to be traded at their father’s will. At the end of the parsha, I imagine they renewed their love and support for each other when it was time for their family to embark on the long journey to return to Yaakov’s family. When an angel of God spoke to Yaakov, he shared his dream with his wives, “I am the God of Beth El, where you anointed a monument, where you made Me a vow; now get up, leave this land and return to your native land. (Gen 31:13).

Rahel and Leah, without hesitation spoke in one voice when they responded to Yaakov, “Have we any longer a portion or inheritance in our father’s house?” Are we not like foreigners to him? He sold us and has completely eaten up our money! Since all the wealth that God has taken away from our father is ours and our children’s, so now do just what God has commanded you!” (Gen 31:14-16) Parshat Vayetse concludes as does our tale of two sisters. Leah and Rahel demonstrated great strength and a joint positive vision for their families’ unknown future in Yaakov’s homeland, Canaan, our beloved Israel.

As we prepare to celebrate Thanksgiving and Shabbat, may Leah and Rahel’s stories inspire us to speak honestly and openly with each other. May we listen carefully to each other’s joys and fears in order to strengthen respectful, supportive, and loving relationships. For some of us, these relationships are as dear to us as siblings. Shabbat Shalom