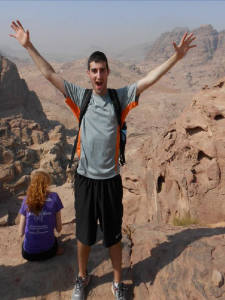 Mr. Backman in Petra over Sukkot

When it came to picking out a college and a major, Mike knew he wanted to work with numbers and that he wanted to do something practical. So he searched and weighed the available data: He looked into economics but found it boring. He looked into physics, but thought it just wasn’t for him, then mathematics, but found it “too theoretical once you got beyond a certain level.” He at last discovered the perfect combination of numbers and practicality—the statistics program at the University of Pittsburgh, saying, “It’s applied, you know, it has real-world applications, it’s not solely theoretical.”

Though Mike may not have factored this into his university decision, his time at Pitt also made him appreciate the value of Jewish diversity from an unexpected new angle when he met Orthodox and non-denominational Jews for the first time at Pitt’s Hillel and Chabad House, both of which he was heavily active in throughout his college career. “Growing up, all the Jews I knew were Conservative or Reform. [College] taught me that Orthodox Jews, or even people who weren’t Conservative or Reform like I knew it, could still interact with the real-world.” He said he “had this stereotypical view that Orthodox Jews have so-called ‘Jewish jobs’ like mohel [circumciser] or shochet [ritual butcher] or working in Jewish education, like they depended on the Jewish world for a livelihood.” But he was soon impressed by how practical a religious Jewish life could be. “It was nice to meet Orthodox Jews who dealt with the real-world on a daily basis. It’s good to have a more complete view of Judaism.”

When Mike graduated Pitt in 2012 he was already accepted into the Ph.D. program in biostatistics at its prestigious Graduate School of Public Health. In biostatistics, he found a field perfectly suited to his interests and concerns, saying, “You’re dealing with medical study data so I feel like it has more practical real-world implications that can be very helpful.” Still, he didn’t want to miss the golden opportunity graduation presented him to go to Israel now while he still had relatively few other obligations. Again weighing the relevant factors, he decided that given his “relative lack of ability to speak Hebrew and the expense,” Pardes was the right choice for him. Though for Mike, there was one another important factor, of course: “I liked Pardes because of the multiple viewpoints, multiple denominations, and I think that’s very good. It’s relatively cheap, too, which is good. But mostly the multiple viewpoints.”

It didn’t take him long to find a home and thrive at Pardes: He is a gabbai of the egalitarian minyan, a constant dominating presence on the ultimate frisbee field and the basketball court, and a recipient of the 5773 Marla Bennett and Ben Blutstein Scholarship. He says his favorite class is Turning Points in Modern Jewish History with “’The Dean,’ Dr. David Bernstein” because “I love history and I’m a big fan of Jewish history and he’s a good teacher.”

His views on Jewish history and purpose have been affected by events outside of the classroom as well. “I guess I’ve become a little more right-wing than I was,” he said of his Israel experience so far, which has including living through Operation Pillar of Defense in November. “I guess just having to deal with air-raid sirens a couple times makes you realize sort-of what Israelis have to deal with when that happens.”

He’s not totally sure of how his Pardes experience will impact his intended future as a biostatistician, but he is sure that it will have a major impact on his life as a Jew, saying, “The biggest influence Pardes has had on my life is that it has made me more traditionally observant.” The reason for this, he feels, is that, “I’m more knowledgeable about Judaism. I feel like I have more of a grounding now for my religious observance now more than just something that I should do, but I realize now more why I feel like I should do it.”