To Feel – To Know

One of the many things that I tell people when discussing Pardes is that I wanted to study here before I ever knew that Pardes existed.

As a college student I started wearing a kippah publicly before I had any idea what halakha was – I didn’t know about keeping Shabbat or kashrut, or much at all about traditionally observant Jewish life – I simply wanted to express my Jewishness. 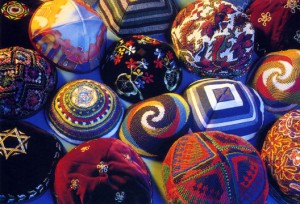 This led me to meet Orthodox Jews for the first time, and I began to adopt Jewish traditions in my life, as I learned of them – I began to keep Shabbat and Kashrut, and I began to wear tzitzit. But after a couple of years, I found myself questioning why I had incorporated these mitzvot into my life – were they meaningful to me personally, or had I come to adopt the lifestyle that I thought frum-looking Jews were expected to maintain?

After a couple of years, I stopped living a traditional Jewish life, telling myself that I would re-explore halakha on my own terms some day… And years later, when I’d completed graduate school, and set out to live in an apartment of my own, I again began incorporating these Jewish traditions into my life… but was careful never to wear my kippah in public. I had to feel – to know – that my desire to live a halakhic Jewish life was coming from within me.

Most of Parshat Shlach is about the story of the ‘Twelve Spies’ or ‘Twelve Scouts’. I think it’s important to note the original Hebrew of the Torah – what action were these spies actually engaged in?

The infinitive of the verb that comes up over & over again in reference to the ‘Twelve Spies’ in Parshat Shlach is la’tur (לָתוּר), which has a very specific connotation – and we find it again at the end of the same Parasha in the context of G-d’s precept to wear tzitzit (at the end of Num., Ch. 15):

The ‘BDB’ dictionary offers the following:

The word carries the implication of neither general espionage nor aimless wandering. Rather, this word connotes turning towards a particular target or direction, just as in the pasuk (see above) referring to tzitzit, which prescribes that we are not to go after our own hearts in lieu of Hashem’s Word.

The Torah does not record what was said amongst the spies, only what they reported upon their return to the camp. To me, their report suggests that most of the spies were engaging in a substantial amount of ‘groupthink’. They got so wrapped up in their pursuit of their initial objective that they soon began ‘pursuing’ one another’s fears and expectations, not thinking for themselves, but following one another’s anxieties.

Below, I’ve highlighted the causes of ‘groupthink’ I believe to be most applicable to the story of the ‘Twelve Spies’ (you may think others apply):

I’m sure that most of us have experienced something like this at one time or another; but over the past few years at Pardes I’ve consistently found that our community defies this tendency. Students who are not outwardly identifiable as Jews may be observing Shabbat and praying 3x a day, and those who are wearing traditional signs of Jewish affiliation (kippah, tzitzit) may be otherwise practicing non-traditional forms of Judaism.

For me, this is one of Pardes’ greatest strengths – ‘groupthink’ is discouraged, as every student explores Jewish tradition on hir own terms. And while we’re not likely to find communities like ours beyond the walls of our beloved beit midrash, we Pardesniks know that this is an ideal that we should forever strive for.