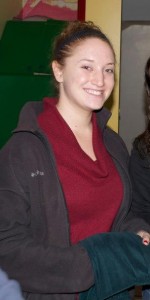 Hannah Grossman is an explorer. Her Jewish journey has taken her from the farthest ends of the earth to the deepest corners of her psyche. Yet the further she has traveled from her native New Jersey, the closer she has come to finally finding her Jewish home.

Hannah grew up in West Orange, NJ to an observant Conservative family. She describes her neighborhood as “very Jewish,” and between her neighborhood and her twelve years spent in a Solomon Schechter day school, “growing up I pretty much knew only Jews.” For her, a large part of what that Jewish environment meant was a commitment to social justice in her home, synagogue, and school, a Jewish value that would remain constant through all the journeys life would later take her on.

Her first experience outside this Jewish comfort zone came in 5th grade when she went to a public camp and formed close friendships with Christians and Hindus. It was then that I realized that there are other people who have more than one god, or a different god. The pivotal moment came when her friends asked about Hebrew, so she wrote their names in script, but they didn’t believe it was real writing, “they just thought I was making it up. And that’s when I realized that just like they’re Christian or Hindu, I’m Jewish.” This insight didn’t mean much to her at the time, however, because she says that for the most part, during this period in her life, “I really just followed everything that I was told to do, and I was fine with that.”

That attitude held until her junior year of high school when hard times struck—Hannah’s father became sick and both of her grandfathers died within two days of each other. While these events were difficult for Hannah and her family, other difficulties resulted after the fact. “My dad had a religious shift then when he joined the Orthodox shul across the street from the Conservative shul we went to, and it was really awkward for us, I think, that our family didn’t [all] go to the same shul.” This situation is still a source of tension that the family negotiates with to this day.

The following year proved transformative in a more positive way, when Hannah went to Poland with her school. She remembers vividly “walking through these remnants of the Holocaust, and it gave me the feeling that I had the need and the responsibility to carry out Judaism for all of those that didn’t have the chance to, and who died for it in a way.”

She participated on Young Judaea Year Course in Israel the following year feeding off this inspiration, but still searching for the right connection. The highlight of Year Course was spending three months volunteering and learning at the sea turtle rescue center in Michmoret. “Waking up to Israel every morning…reaffirmed my connection to Israel, and that’s where my Zionism really started to take hold.” By the time she entered UMass Amherst that fall, while her major may have been coastal marine sciences and public policy, her mind was increasingly occupied with Judaism.

The tipping-point came her sophomore year while doing research on a boat in the Gulf of Mexico. As she tells it, “There were no Jews in Ocean Springs, Mississippi, so they were really fascinated by me. I remember answering their questions about Judaism, and these conversations about Israel and Judaism they were having, and I found myself caring so much more about that than about what we were doing on the boat. That’s when I decided to change my major to Judaic Studies.”

The following year, Hannah took another, longer trip to Eastern Europe, this time with an inter-faith University trip through the Jewish Studies program. Though she had walked many of the same paths a few years prior, they now felt completely different. “This time, people were really asking me questions about Judaism. As we were walking through ghettos and camps and past death pits, and I felt these people didn’t know who the Jews were…are.” This, more than any previous experience, made her see the great importance of teaching about Judaism and its morals to both Jews and non-Jews, “because that ignorance, or simply lack of knowledge, can become destructive. There’s a lot of power in any body of knowledge and understanding- and I wanted to spread the same about Judaism.”

This trip also took her to Prague, where she knew that “there are all these Jews there who didn’t know they were Jewish after the Holocaust and Communism,” and that she was going to try and help those who wanted to explore their newly discovered identities. So she taught at the Lauder School, a Jewish school in the Czech Republic; went to as many different shuls as she possibly could; attended a rabbi’s class; and even taught a man an introduction to the laws of kashrut. This experience cemented once and for all her desire to become a Jewish educator, as she discovered first-hand how great it was “to see people rediscover their Jewish identities, and to be able to help them.”

Infused with this energy, she applied to spend a year abroad working for the American Jewish Joint-Distribution Committee (JDC) after graduating college. Initially, she envisioned spending a year in the Former Soviet Union, believing that that was where she could make the biggest impact. “I researched and found that most other Jews in places like India and Turkey who cared had moved to Israel already, and I wanted to go where people wanted me.” But a long conversation with the program’s director convinced her that India was where she was meant to be. As time passed Hannah became more convinced that no matter where Jews reside or how small a community is, there is value in enriching the Jewish life and commitment. And with that, Hannah left for her year doing Jewish community outreach, organizing, and community-wide Jewish education at the JDC-JCC Center in Mumbai.

It was in this place, surrounded by a Hindu culture so far removed from the rest of the Jewish world, that answers to the nagging Jewish questions that time in Eastern Europe and Israel couldn’t solve began to materialize. “Walking past idols every day, all the time…just made me think a lot about the value of our concept of God. Another thing was really seeing the Hindu caste system…the way it treats people who may not be so useful to society…made me appreciate Judaism’s emphasis on loving the stranger and the widow and welcoming them. [I see a level of Divinity in this] and realizing that made me see a lot more value in Judaism, and I think in God, too.”

Far from “not being wanted,” Hannah’s Mumbai experience taught her “with so much passion that it’s important for Jews everywhere around the world no matter how few they are or how isolated they are to have…awareness of their Jewish identity. I think it does a lot of good for the people around the Jewish communities and for the communities themselves.”

Also while in India, Hannah began applying to graduate school in Jewish education, but she stopped when she decided that she wanted to get more Jewish content learning beforehand. While she was already vaguely familiar with Pardes, after hearing about the new MA Plus Pardes program with the Pardes Center for Jewish Educators, where she could get textual learning and pedagogical skills before heading to grad school, she thought it sounded perfect for her.
It has been. Though she has enjoyed much of her experience here, “My favorite thing about Pardes is the chevruta learning. I really see this joining community with text, and it’s really great to learn with another person continuously. I think that’s the way it should be.” She has also found an unexpected new love. “I’ve never really studied Talmud before in-depth, and I’m loving the Talmud class. It’s a whole new world to me. At first I hated it… but I stuck with it and now I see a lot of other meaning in what we’re learning, and it’s expanded.”