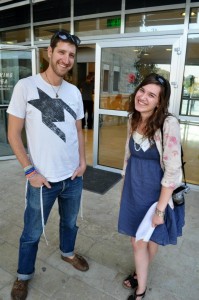 If you walked the halls of Pardes days during our 2012-2013 year program, you might have noticed two students spending a lot of time together. You might have heard them laughing on a Jerusalem park bench. You might have seen them learning together in the Beit Midrash. If you found them at your Shabbat table, you might have enjoyed her famous challah or his famous hummus. But you might not have known that the week before fall semester, they hadn’t even met!

Five generations of Koplens have hailed from Danville, VA since the late 1800’s when Max and Paula Koplen first emigrated from the Russian Empire and founded the store that later became the Abe Koplen Clothing Co. Mary Brett Koplen, laughing that she may be related to half of Danville’s current Jewish population, fondly recalls large Koplen Family holiday meals at her Great Aunt Helene’s home with all her family and their friends attending.

Danville has a fairly small Jewish community, and Mary Brett and her family felt responsible for it. Every week, her father and grandfather would bring Mary Brett and her sister to Temple Beth Sholom for Kabbalat Shabbat services and the Friday night oneg; and her Grandfather Albert would occasionally teach Jewish history to the children of the community at Sunday school, as one of the parental volunteers.

Whereas Mary Brett’s Jewish identity was most nurtured by her father’s family, a boy in San Jose, CA was inspired by his mother’s deep love for her Jewish heritage. Adam Masser still bears memories of Shabbat family meals, mezuzot hanging on all the doorposts of his home, separate dishes for meat and dairy, and attending Camp Gan Israel of Sunnyvale as a young boy. Sadly, all this began to fade when his mother passed away while Adam was just ten years old, but her spark would remain with him. 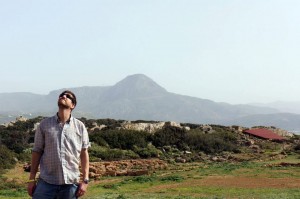 In boarding school at the Wasatch Academy in Utah, Adam was one of only three Jewish students. He was very active, serving as captain of his varsity karate team, playing baseball and running track; snowboarding and hiking in the wilderness. He also managed the computer lab, wrote stories and poetry, and taught himself to play music on his mother’s guitar. And he was sparked to arrange for a van to Yom Kippur services in Salt Lake City, and to make sure that there would be matza in dining hall for Pesach.

Jewish community remained a primary theme of of Mary Brett’s life, even as she began her studies at Ohio University. She dreamed of Hillel, “a place where everyone would be Jewish”, and she was shaking with excitement when she first pulled open the doors. After copying the entire Hillel calendar into her personal planner, the young woman threw herself into Jewish life and eventually applied to become a Hillel intern.

Like Adam, Mary Brett loved to write, and she majored in Literature, allowing her to design tutorial courses for herself such as ‘Jewish American Literature’ and ‘Women and Judaism’, which informed her Jewish identity. She also worked as a university tour guide, ran a nursery school program for a local church, and eventually became the Hillel Intern Team Supervisor, taking the responsibility over from her mentor Rabbi Danielle Leshaw (Spring 2000) who encouraged her to come study at Pardes in Summer ’11. 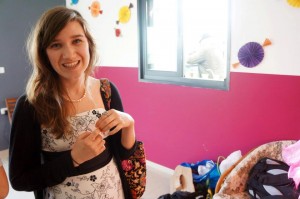 During his sophomore year at college, a fellow student encouraged Adam to visit the Chabad house, and he soon became a regular. Not long after hearing of Hillel from others at Chabad, the young man was recruited as a guitarist to lead Kabbalat Shabbat for the Hillel community, which he continued to do for three years. He also continued attending events and services at Chabad, and eventually joined the Jewish men of the University of Oregon Alpha Epsilon Pi chapter.

Following graduation, Adam worked as field manager for an environmental campaign and then as a software developer before beginning law school at Fordham in New York City. This led to exciting internships – working for the OECD in Paris, the United Nations Development Programme in NYC and founding a clinical legal education program in Ghana – before Adam graduated and found work with a major law firm.

Great plans were laid during the summer of 2011. Mary Brett knew that she would be coming back to Pardes for the Year Program; three weeks had only been the tip of the iceberg… but first she had to graduate from college.

That same summer, Adam attended the wedding of his friend and fraternity brother Will Keller (Year ’10, PEP 2010-’12), and met a number of other Pardesniks. A spark fluttered in him once again, and Adam found himself longing for Jewish community and study. He went on the 2012 Pardes Arava tiyul, and then joined the community that very Spring semester.

In the Fall of 2012, Mary Brett returned to Pardes and found herself on a field trip to the Jerusalem shuk with Dr. Meesh Hammer-Kossoy’s Social Justice class. Together, she and fellow student Adam Masser spoke with a needy woman asking for spare change on the street – and Mary Brett was struck by her classmate’s compassionate and respectful questions.

Several days later, Mary Brett happened to be speaking with some friends at Pardes about bicycling. Adam shortly entered the conversation, and the two of them made casual plans to go for a bike ride after school in mid-September. The young woman almost canceled on him because she had unintentionally double-booked herself, but Adam had already gone out to buy peanut butter, jelly and bread… and her heart melted slightly. Together, they biked to Independence Park in the afternoon and played on the children’s playground. 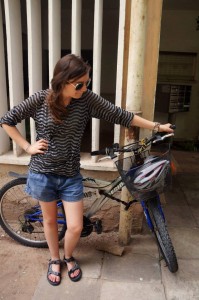 As it turned out, they discovered that Mary Brett’s bicycle brakes were falling apart, and only two of her gears were operating correctly so Adam gently offered to repair her bicycle… and back at his apartment he got to work. Fixing the brakes was easy for him, but the gears on Mary Brett’s bicycle became a bit of a nightmare, and after three hours of hard work the young man declared that he needed another spare part.

As she stood nearby, holding all the different bike parts and tools that Adam couldn’t hold on to, the two Pardesniks found themselves laughing, joking together, and getting along spectacularly; and Mary Brett smiles even now, as she thinks of how Adam continues to make her feel joy and laughter and gladness. She was nervous then about feeling strongly for somebody who was only planning on staying for one more semester, but there was something special about Adam and it felt like they’d been destined to meet… so on Rosh Hashanah, they agreed that they were a couple.

Throughout the course of the 2012-’13 Year Program, Adam and Mary Brett became inseparable, and Adam actually chose to remain at Pardes as a Fellow for the 2013 Spring semester in large part because of their relationship. Together they served the Pardes community as gabbaim for the egalitarian and mechitza minyanim, and together they returned to NYC at the end of the school year.

Next year, Mary Brett will be studying as an Education Fellow at Yeshivat Hadar, training to develop a day school beit midrash environment; and Adam restarts his career in New York after his year and a half of intensive Jewish text study. Their classmates and teachers all love this adorable couple, and we all look forward to further updates on their lives and many adventures! 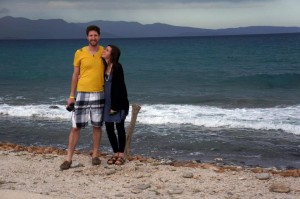