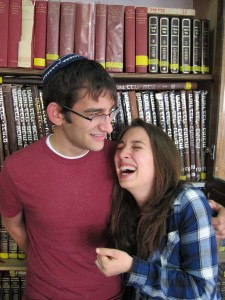 Sydni Adler (Year ’13) and Ben Gurin (Year ’13) met during the Summer of ’10 in Washington DC, as participants on the Mechon Kaplan program of the Religious Action Center of Reform Judaism. Together with their cohort, they took classes on Social Justice and Judaism, and each interned for an NGO; Sydni worked on campaign finance reform at ‘Common Cause‘, and Ben worked at ‘Jewish Funds for Justice‘. Over the course of that summer, the two of them gradually became best friends, as they found themselves constantly gravitating towards one another.

Unfortunately, the young duo had a geographic problem: Ben was a Midwesterner, a third generation legacy student at Indiana University; and Sydni had grown up on the West Coast near L.A., and attended college on the East Coast at Swarthmore. For several months after their Mechon Kaplan summer had ended, they spoke by telephone daily, even though “they weren’t in a relationship”, and then Ben came to California to check out HUC in L.A during Fall Break in October. He visited for several days with Sydni and her family, and then asked her out while she was behind the wheel on the perilous 101/405 Interchange… to which Sydni responded, “Could you just give me 10 minutes?”

Sydni had loved attending Hebrew School and assistant teaching at Temple Adat Elohim, and felt that her community encouraged her inquisitive nature. She always looked forward to seeing her large, extended family on the Jewish holidays when they all flew in from around the country to visit their bubbe, and she loved their Jewish stories, culture and Yiddish’isms. She herself would quietly recite the Shema whenever she wanted to calm herself, and was moved once when she saw her little brother Jacob (nearly 16 years her junior) dancing around their home and singing the Shema aloud… “We can all find similar connections to God,” she wondered.

The young woman was a very committed piano student, practicing for five hours a day by the time she graduated from high school, and majoring in music was a natural choice for her. Still, Sydni found her heart drawn to Jewish studies and interfaith work at Swarthmore. Her tiny Hillel community was student-run, and the interfaith center had to fight to raise religious awareness on campus so Sydni took full advantage of these leadership opportunities. She also minored in religion, and took courses in Jewish text studies every semester with Rabbi Helen Plotkin (Year Program ’82) who inspired her, and encouraged her to continue her studies at Pardes. 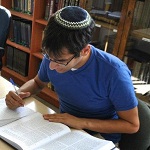 Growing up in Fishers, IN Ben had always embraced his Jewishness, as he was the only Jew in his grade until he entered college. As a child, he was always reading books about Judaism, and he first organized and led his family’s Pesach seder with post-it notes and a children’s Haggadah when he was only five years old. After Ben’s bar mitzvah at Indianapolis Hebrew Congregation, attending Friday night services became a regular family event, and the young man would constantly urge his parents to “do more Jewish stuff” as he learned more and more about Judaism from Hebrew school and books. They led a Jewish rhythm of life, celebrating Shabbat every Friday, and bonding together by operating their family-owned ‘Ben and Ari’s‘ arcade and mini-golf course on Saturdays, which his parents had named after him and his younger brother.

In College, Ben attended Chabad, and joined the Jewish Studies Student Association, eventually becoming the president. Majoring in Jewish studies and religious studies was a natural fit for him, and the young man became very interested in the intersection between Christian and Jewish thought, particularly on the matter of Jesus’ Jewish identity and how this historic figure underpinned all of Western Civilization.

“The Jewish response to most of our problems has always been always been more knowledge… except in the area of Christianity, where we have pretty much decided to ignore it. I think Jews should have literacy in Christianity to live in the diaspora. I think we should learn how to drash on Jesus.”

After graduating from college, Sydni and Ben decided to heed Rabbi Plotkin’s advice, and study at Pardes together before each applied to rabbinical school. Sydney was excited for further text study, and never having been in a halakhic environment before she wanted to experience it. She yearned to experience Israel beyond the limits of her Birthright trip. On Ben’s part, he figured that he would benefit by improving his Hebrew language and traditional Torah study skills, but “Pardes blew that all away.” Ben and Sydni got much more than they’d expected.

The complexity of Israel has fascinated Ben, and Sydni has found an affinity for halakha as a communal expression of love for God, which grew out of the Divine love story of the Tanakh. Ben’s academic, rational approach to Jewish studies and her loving, soulful seeking have come to compliment one another. As a team, they continue to learn about Jewish community; about individuals; about living in Jerusalem; about Judaism… and exploring the nuances of Israel and the Jewish narrative has been incredibly rewarding for this duo, as they’ve dived into Pardes together.